An occasional series in which I comment on a recent read …

My review of Erin Hart’s latest, The Book of Killowen, appears in this month’s Book Page.

(I received a copy of this book from the publisher via Book Page, but made no promise of a review, good or ill, in return.)

Fingerprints have been used to express individuality since we lived in caves, really, but more definitely since the 7th century. The fingerprint ridges were discovered to be unique in 1788, and the patterns divided into the three categories in 1823. But their official, consistent use in human identification began in 1858. The first use in a criminal case was in 1892 in Argentina and they were first used in a criminal trial in England in 1902. Fingerprints were first used in a murder case in the US in 1908. So this is a science that’s been officially accepted in US criminal court cases consistently for one hundred and three years. It’s been consistently used as a means of identification for the past hundred and fifty
years and has been subjected to computerized searching twenty-four/seven/365
for the past thirty years.

I made 39 fingerprint identifications in 2010. And that’s just me personally, at one small and relatively low crime city in the US.  So if you multiply that by 11 years, then I have identified someone by their fingerprints in roughly 429 criminal cases.  I have never once had someone come back to me and say, you’re wrong, this isn’t my print.

Of course not every one of these prints equals guilt. Fingerprints can match for completely innocent reasons, as when the person lives or visits there.  And this is one of the things that reinforces to us that the computerized system works exactly as we think it does–when out of the 200,000 sets of ten prints in my system the computer just happens to come up with the person who lives in the house. Oh, and incidentally, despite what you see on TV the computer does not decide when something is a match. The computer will just bring up the most closely similar patterns it has in its system. Then I look over the possibilities but to do the comparison I will use the original latent print and the original 10 print card. Computers do not match people; only people match people.

These days we see a lot of comparing and contrasting between fingerprinting and DNA analysis. The problem with wanting the same kind of statistical analysis that you get with DNA results with your fingerprint results is that you’re comparing apples and oranges. DNA is much easier to read and statistically analyze than fingerprints because it’s
narrowed down to a few simple checkboxes. This allele is a 1,3 or it’s a 1,2. So you can add up all the people who have 1,3 and determine they’re 20% of your particular regional population. Then you can add up all the 1,2 and determine that they’re 10%, then you multiply all those percentages together to get some magic number like 1 in 42 trillion people. But with fingerprints you’re talking about a point of minutia, say a ridge ending. At present we have no way to fit this into a neat table that says 20% of people have a ridge ending right here in which the ridge flows 34 degrees from the point of origin and the next ridge ending is two ridges over and a millimeter south and it also flows 92 degrees
until it bifurcates—there is no such chart, no handy percentage that can be multiplied and therefore no magic number of 1 in so many bazillion. I’m sure that somewhere in the future will be developed some freakishly intricate logarithm, but for the moment trying to stuff fingerprints into the same neat little package that DNA comes in is not possible.

But your real question is, and what is a much more reasonable question, is how does a fingerprint examiner decide that this latent print matches this person’s finger? That, of course, is a whole ‘nother stretch of road. I know lawyers who still think the FBI uses 8 points to make a match or that England uses 12, 16, or even 36. There is no number.
Supposedly examiners used to use 8 as a comfort zone. Some other countries (not
England, by the way, they eliminated the point number standard in 2001) still use numbers. I’m happy for them if that makes their lives easier, but it doesn’t mean anything. The numbers are just numbers, there is no scientific significance to any of them. A 16 point match is not better than a 12 point match is not better than an 8 point match. This is difficult to really accept because we’re Americans—more is always better. But you can think of it as being pregnant. You’re not more pregnant at 6 months than you are at 3. You might be more noticeable, but you’re not more pregnant. You either are or you aren’t.

And this actually makes my life a lot more difficult than it makes yours, because then I’m left with telling a jury that it’s a match because I say it is, which isn’t a comfortable experience for either of us. Actually Brandon Mayfield is a perfect example of why this number requirement is useless. The FBI reported a 15 point match in that case—and it
was still wrong. Seeing 15 points because you want them to be there is no more helpful than seeing 2 crystal-clear ones. Wishful thinking and overeager examiners will always get you in trouble, and I don’t believe there’s any way to prevent that. Those kind of errors—and of course the flat-out concocting of evidence—are always going to occur. Any system is vulnerable to an inside job.

But there will always be a simple way to reverse those problems, which is exactly
what occurred in the Mayfield case and the Asbury/McKie case, and others—you take it
to another agency and have them look at it and they say, crap, no, that’s not a match! That’s what we mean when we say the methodology works even when the people don’t. That’s the beauty and perfection of fingerprints. They’re right there in black and white. You can pull out that card fifty years from now and it’s still going to look exactly the same, and then the methodology will correct the mistake.

As for the idea of DNA ‘replacing’ fingerprints, as was mentioned in the recent 3rd US Circuit Court of Appeals, that’s never going to happen. I’m all for more DNA testing because we’re collecting more DNA samples for more crimes, such as collecting drops of
blood when a burglar cuts himself on a broken window or swabbing a steering wheel for touch DNA in a hit and run. As with any other technology it continues to get easier and cheaper to do more. But fingerprints will still be even easier and cheaper than that. If the fingerprints match, the DNA is going to match. If the DNA matches, the fingerprints are going to match unless it’s identical twins. The point is that you don’t get a choice of which gets left at a crime scene, so it’s best to have samples of both from your suspect. I can’t see any of you saying well, we don’t need fingerprints, we’ve got DNA or vice versa because everything is a different story once opposing counsel gets a hold of it. Anything can be challenged or thrown out, and especially in these days of the CSI effect so you’re always going to want every piece of evidence you can get. (For more on the CSI effect, see Doug Lyle’s guest post.)

So in conclusion, you can’t argue with success. Fingerprint science has withstood every challenge thrown at it through the ages and I’m confident that future technology and testing will only make it more bulletproof.

Lisa Black spent the five happiest years of her life in a morgue. 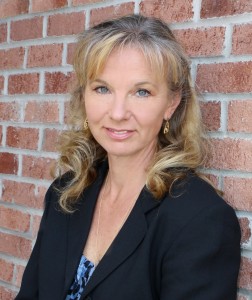 As a forensic scientist in the Cleveland coroner’s office she analyzed gunshot residue on hands and clothing, hairs,
fibers, paint, glass, DNA, blood and many other forms of trace evidence, as well as crime scenes. Now she’s a certified latent print examiner and CSI for the Cape Coral (Florida) Police Department. Her books have been translated into six languages. Evidence of Murder reached the NYT mass market bestseller’s list. Find out more about Lisa and her books at her website.

Lisa’s new book, Blunt Impact will be available April 1, featuring forensic scientist Theresa MacLean and a series of murders surrounding a skyscraper under construction in downtown Cleveland. The first to die is young, sexy concrete worker Samantha, thrown from the 23rd floor. The only witness is her 11 year old
daughter Anna, nicknamed Ghost. Ghost will stop at nothing to find her mother’s killer, and Theresa will stop at nothing to keep Ghost safe.

Also, Kindle owners can find a bargain in her new book The Prague Project,
written under the name Beth Cheylan. A death in West Virginia sends FBI agent Ellie Gardner and NYPD Counterterrorism lieutenant Michael Stewart on a chase across Europe as they track stolen nukes and lost Nazi gold, hoping to avert the death of millions of people.