I adore both Northwestern Montana and Seattle’s Pike Place Market. Thanks for making the trip with me!

You can see images that inspired my books on Pinterest, where I’ve created boards for BITTERROOT LAKE, the Spice Shop Mysteries, and the Food Lovers’ Village Mysteries, along with boards illustrating my year as Sisters in Crime president, my beloved Montana, and more! 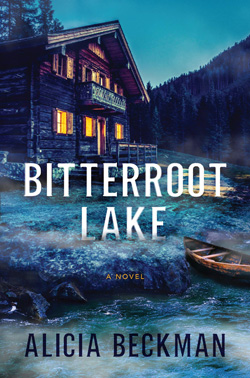 BITTERROOT LAKE, written as Alicia Beckman, is set in Deer Park, Montana on Bitterroot Lake. Both town and lake are fictional, although there is a Deer Park Elementary School and a small lake called Little Bitterroot, both in Western Montana. My Deer Park draws on my memories of several towns in Montana and Idaho, including both Choteau and Kalispell, Montana, where the courthouses sit at what was once the end of town, the streets forced to split and make their way around the gracious old buildings as town grew!

Western Montana is dotted with historic lodges. My Whitetail Lodge, owned by the McCaskills since 1922, shortly after its construction, is inspired by stories and pictures of the famed Kootenai Lodge on Swan Lake, as well as visits to Flathead Lake Lodge (also featured in the Food Lovers’ Village Mysteries) and the lodges of Glacier National Park.

And I’m delighted that the book includes a map, created by my friend, Francesca Droll, from my sketches. Francesca is both a graphic artist and a fine artist, whose oils and pastels capture the region beautifully. Treat your eyes and imagination with a visit to her website.

Jewel Bay, the Food Lovers’ Village, exists only in my mind–-and I hope, in yours, after you’ve taken an armchair tour. To help guide you, here are my maps of the Village and the area. 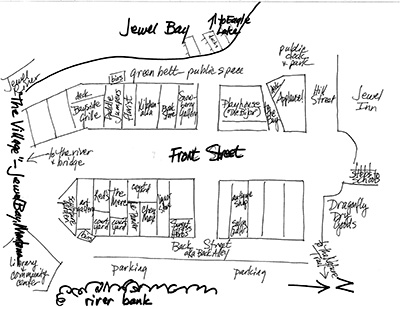 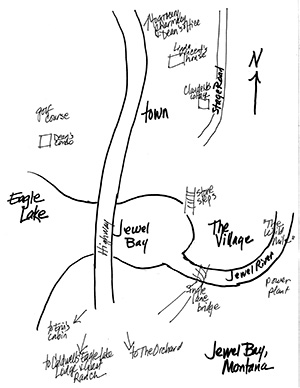 But Jewel Bay does resemble Bigfork, Montana, a picturesque town tucked between the Mission and Swan Mountains and Flathead Lake, where the Swan and Flathead Rivers flow into the lake. It sparkles year-round, with art galleries, theater and music, outdoor recreation (golf, boating, hiking, riding, and more), and yes, lip-smacking restaurants. Like Jewel Bay, Bigfork is not an incorporated town, but you can find tourist info from the Bigfork Area Chamber of Commerce.

Glacier National Park, aka The Crown of the Continent, is only thirty miles away.

Get more ideas for exploring “Glacier Country” from the Montana Office of Tourism.

As a student at Seattle University and later as a young lawyer working downtown, I ate my way through the city’s famed Pike Place Market at least once or twice a week. I’d start at the main entrance with a slice of pizza from DeLaurenti’s walk-up window, then browse the magazine covers at the First & Pike Newsstand—eyes only until my hands were clean! I’d sip a sample cup of tea from Market Spice while watching the fishmongers throw salmon and amuse the crowd with their comedy routine, pick my produce and cheese for the week, and end with dessert—a hazelnut sablé from Le Panier, the French bakery, or a Nanaimo bar from a now-departed take-out joint in the warren off Post Alley.

So naturally, when I thought about setting a mystery series in Seattle, the Market beckoned. I’ve done my best to be faithful to the city of Seattle, but a city is not a stagnant thing. Shops and restaurants open and close. Buildings come down and go up. Public works projects run into obstacles—sometimes literally, as in the case of Big Bertha, the machine that created a tunnel near the waterfront so the Alaskan Way Viaduct could be relocated underground. If the city on the page does not quite match the one you know or remember, please forgive me.

And I’ve taken a few liberties to make the Garden Center building, now home to Beecher’s Cheese and the Local Color art studio and café, work for a spice shop, and to create the loft where Pepper lives. My Seattle Spice Shop is not Market Spice, World Spice Merchants, nor any other actual business. But if I have captured some of the flavor of the Market, then the magic of the tea is still working.