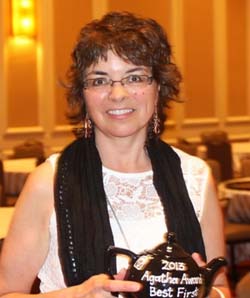 Leslie Budewitz blends her passion for food, great mysteries, and the Northwest in two light-hearted mystery series: the Spice Shop Mysteries, set in Seattle, and the Food Lovers’ Village Mysteries, set in northwest Montana. Her books focus on strong women who share her passions, and have a talent for finding trouble!

Leslie is a three-time Agatha Award winner: 2011 Best Nonfiction for her guide for writers, Books, Crooks & Counselors: How to Write Accurately About Criminal Law & Courtroom Procedure; 2013 Best First Novel for Death al Dente (making her the first author to win Agatha Awards for both fiction and nonfiction); and 2018 Best Short Story (in a tie) for “All God’s Sparrows,” her first historical fiction. Her work has also won or been nominated for Spur, Derringer, Anthony, and Macavity awards.

A Montana native, Leslie graduated from Seattle University and Notre Dame Law School. After practicing in Seattle for several years—and shopping and eating her way through the Pike Place Market regularly—she returned to Montana, where she practiced civil litigation and employment law, with an unhealthy dose of criminal law. Killing people—on the page—is more fun.

Leslie sits on the national board of Mystery Writers of America. She served as president of Sisters in Crime in 2015-16, and is a founding member of the Guppies, the SinC chapter for new and unpublished writers. She is also a member of the Authors of the Flathead and Montana Women Writers.

Leslie loves to cook, eat, hike, travel, garden, and paint—not necessarily in that order. She lives in northwest Montana with her husband, Don Beans, a singer-songwriter and doctor of natural medicine, and their gray tuxedo, officially named Squirt but affectionately called Mr. Kitten.

Why set a mystery series in Pike Place Market?
I fell in love with the Market as a college freshman, not long after the voters saved it from destruction, and made it my mission in life to eat my way through it. It’s constantly changing, so I’ll never be done! As a student and then as a young lawyer working downtown, I ate and shopped my way through the Market weekly. The food is fresh, local, wild, and wonderful. Creative and colorful, funky and flavorful. I also adore the vibrance and energy of the place, from the street corner musicians to the flying fish to the artisans who run the craft stalls, and the ever-changing mix of merchants in the “stores with doors.” It’s a treat to imagine the place from the inside—thanks in part to the merchants and vendors who’ve shared their stories with me—and share it with readers.

What inspired you to create a fictional spice shop?
So much inspiration! The famed Market Spice Shop, located by the flying fish, and World Spice Merchants on Western Avenue. There’s a whiff of Butterfly Herbs in Missoula, Montana, and every spice shop I’ve ever visited. I created my own so I wouldn’t be limited by reality—and so I could kill people.

And Pepper’s loft?
Totally fictional, though I know just where it would be if it existed. Writing is a wonderful way to live other lives, while cherishing our own.

Is there really a Merc, the heart of the Village series?
Since the village of Bigfork, my model for Jewel Bay, was founded in 1901, there have been several mercantiles “downtown,” including one close to the location of my fictional Merc. A sandstone block building on the north end of the village of Bigfork, now a sculptor’s gallery, housed another early Mercantile, and still bears the sign. It closed in the late 1960s when a supermarket was built out on the highway, but my husband remembers visiting it as a child, and I fondly recall similar shops in other Montana towns. I chose to create my own Merc, so I could play around a bit and give Erin her own memories.

What’s next for Pepper?
Pepper’s sixth adventure, Peppermint Barked, will be out in the summer of 2022. Seattle Spice Shop owner Pepper Reece investigates when a young woman working the Christmas rush in her friend’s Vinny’s wine shop is brutally attacked, on the busiest shopping day of the year.

Pepper and the crew will return in the summer of 2023! All I know about their seventh outing is that it starts during a Food Walk in the Lunar New Year celebration, in Seattle’s Chinatown–International District.

What’s next for Erin?
Erin’s taking a break after her last adventure, “The Picture of Guilt,” a short story in Murder at the Mountains: A Destination Murders Short Story Collection, edited by my friends Karen Cantwell and Cathy Wiley, published in February 2022. I’m fairly sure she’ll be back in some form, as will her great-grandmother, Kate, whom readers met in the historical novella in Carried to the Grave, a prequel in which we learn that Erin’s sleuthing skills may well be inherited!

What’s next for you?
Alicia’s second suspense novel, Blind Faith, will be out in October 2022, again from Crooked Lane Books. Two women whose paths crossed when they were teenagers in Montana discover they share keys to a deadly secret that exposes a killer—and changes everything they thought they knew about themselves.

Why the pseudonym?
Simply to avoid confusion with my cozies. It’s an open secret, though, so do spread the word that Leslie and Alicia are the same author! The name honors my mother and grandmother.

Your series books are often called “cozies.” What is a cozy mystery?
The easy answer is “no graphic sex or violence. Lots of graphic food.” But it’s more than that. Murder disrupts the social order of the community. In any amateur sleuth mystery, there are two parallel investigations. The official investigation by law enforcement restores external order, by bringing the killer into the judicial system. The amateur sleuth has access to information and insights that the police lack, because of her role within the community. She can identify the killer and turn him or her over to law enforcement, but in doing so, she can restore the ruptured social order. Ultimately these books are about community.

Where can I find your books?
They’re available from all bricks-and-mortar bookshops and all online booksellers. In Western Montana, find them in Whitefish at Bookworks, in Kalispell at The Bookshelf and Montana Gift & Art at the airport, and in Bigfork, at Roma’s Kitchen Shop and the Bigfork Art and Cultural Center Gift Shop. In Missoula, find them at Fact & Fiction, Barnes & Noble, and Shakespeare and Co. I am a big supporter of independent booksellers, going back to my days as A Teenage Bookseller, and they have been important in my career as an author. Locally-owned and operated retail is critical to our small and big towns, and I hope you can share the love.

My books are also available in libraries across the U.S. and Canada. (I’ve been amazed to see how many Alberta libraries carry them!) Remember you can ask your library to purchase any book—library staff love to know what their patrons want to read.

“A Picture of Guilt,” in Murder in the Mountains: A Destination Murders Short Story Collection (February 2022)

And you write short stories, too?
I do! I’ve included links for those available free on line.

Tell us about the books Pepper reads.
I didn’t know Pepper was a big fan of Ellis Peters’ Brother Cadfael mysteries until she pulled that first book out of her mother’s box. She’s working her way through the series—giving me a chance to reread them—before moving on to Margaret Frazer’s Sister Frevisse books. Now and again, she’ll pick up another historical mystery or a culinary cozy, often those she sells in her shop. A reader suggested I compile a list of Pepper’s reads and the cookbooks mentioned in the books–it’s on my blog, in multiple parts. 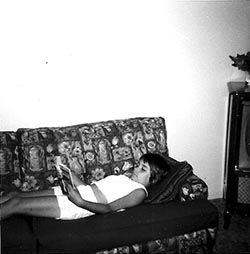 Where do you find your recipes?
Some, like the minted fettucine, stuffed mushrooms, and palmiers in Death al Dente are old favorites. My husband created the Huckleberry-Morel Tenderloin in Crime Rib after eating a steak and portobello in an Italian restaurant in Monterey. Others are adaptations of recipes by cooks I admire—I’m a fan of David Lebovitz, the Williams-Sonoma online recipe collection, and Deb Perelman.

Occasionally, I go hunting for a recipe to fit what’s fresh in the Pike Place Market, or that Laurel in the Spice Shop Mysteries might bring home from Ripe, her downtown deli. The Spice Shop creates its own seasonal spice blends, so I like to offer those recipes and a dish or two highlighting them.

I share a recipe, with photo illustrations, Mystery Lovers’ Kitchen on the first, third, and fifth Tuesdays. It’s a terrific blog, with thirteen fabulous writers who cook up recipes and crime, regular guests, and occasional giveaways. Do join us!

What about those cover models? 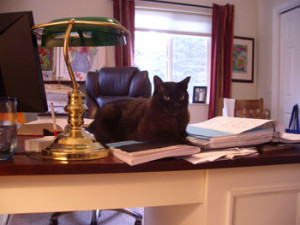 Erin’s companion, Mr. Sandburg, is a sable Burmese based on Ruff, who lived with us when the series started and was an excellent supervisor as well as a cover model and an avid bird watcher. Burmese make wonderful pets—especially if you like a cat who talks to you.

Pumpkin, who comes to live with Erin in Butter Off Dead, is a full-figured orange tabby based in personality and appearance on Autumn, who had a long and happy life with us and deserved a place on the page. 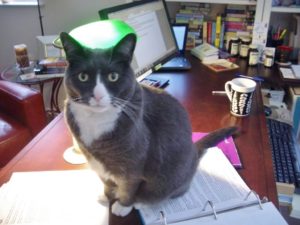 These days, we enjoy the company of Squirt, a “senior” Russian Blue tuxedo, with a rich gray coat and a quirky personality, who brings us much joy.

As for Arf, Pepper’s “Mr. Ambassador,” he simply walked on to the page with Sam and stayed. I’ve never owned an Airedale or their Welsh cousins, but have met several, and clearly, they are the “King of Terriers”!

Will you visit our book club or library, or speak to our writers’ group?
I’d love to! Drop me a line.

I’m also available to speak and teach at writers’ conferences. I’ve had great fun as a panelist and moderator at all the major mystery fan conventions—Bouchercon, Malice Domestic, and Left Coast Crime. I’ve also given presentations for Sisters in Crime national and several chapters, as well as chapters of MWA and RWA and at several writers’ conferences, including Colorado Gold (Rocky Mountain Fiction Writers), the Flathead River Writers Conference in Kalispell, MT, and the Writers’ Police Academy. My favorite topics include characterization, setting, and common mistakes writers make about the law.

Drop me a line for details and references.

How can I get book news and bookmarks? I’m so glad you asked!

My mailing list: I’ll write you every month or two with news and updates, upcoming events, what I’ve been reading, and some of the goings-on at my house. It’s fun, chatty, and easy to read. Plus you’ll get a free short story. (Right now, it’s “The End of the Line,” originally published in Alfred Hitchcock Mystery Magazine, about an elderly Greek man who seriously hates change.) I’ll never share your email address and you can unsub anytime. Subscribe by clicking on the newsletter tab on the top of this page or the cute little envelope at the bottom.

BookBub: No time for chat? Just the news? Bookbub sends new release alerts and deal alerts, and lets you know when a book I recommended has a deal.

Goodreads: GR sends a regular update on authors you follow. Plus you can peek at my blog via GR, if you’d like.

Facebook: Not as reliable as it once was, darn it, but follow me there to chat and get regular book updates.

Recipe corrections: The recipe in Death al Dente for Fettucine with Minted Tomato Sauce is missing the amount of mint. Use 1/4 cup fresh mint leaves, chopped.

And in Treble at the Jam Fest, the recipe for Omelet Muffins calls for baking powder in the ingredients and baking soda in the instructions. Use baking powder.