Writer working on book about kindness shot while hitchhiking? Say it isn’t so!

Montanans were understandably upset by the report that a man hitchhiking the country to research a book on kindness was shot in our state. But boy, were we peeved when it turned out he shot himself as a publicity stunt. I’m sure others shared my gratification at how quickly law enforcement discovered the fraud and cleared the man falsely accused, although he was held on an unrelated charge of drunk driving.

The Missoulian reports that Valley County sheriff’s deputies didn’t find a gun or ammo in the pickup of the man accused–who was driving a pickup that matched the one described–and found his denial credible. They used his GPS to trace his route–which put him miles away from the shooting at the time the alleged victim claimed it occurred. So they went back to the scene and found a small pistol in a nearby field. They traced the gun to West Virginia, where the alleged victim had bought it days earlier.

According to an August 15 report in the Glasgow Courier, the alleged victim has now been charged with one count of felony tampering with evidence and two misdemeanor counts of making a false report and obstructing a peace officer. He pleaded not guilty. He was released on $10,000 bond and allowed to leave the state to live with a relative near a VA hospital where he can be treated. In typical western graciousness, the sheriff expressed hope that he get evaluation for mental problems

You can’t make some of this stuff up.

Update: Lee Newspapers report that Ray Dolin is scheduled to appear in court on Monday, October 29, and is expected to plead guilty.

Curious about my forthcoming mystery series, The Food Lovers’ Village Mysteries? Come meet Erin Murphy, my protagonist, on my debut at Killer Characters, the group mystery blog where the cozy characters do the talking! 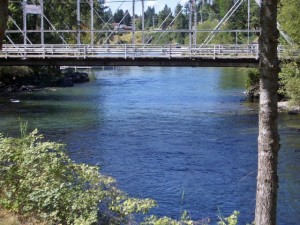 Here’s a shot of the one-lane bridge leading into the Village of Bigfork, Montana–a dead ringer for Jewel Bay, the story setting.

And I’d love to visit with you at my new Facebook author page! http://www.facebook.com/LeslieBudewitzAuthor

“It is a common experience that a problem difficult at night is resolved in the morning after the committee of sleep has worked on it.”

Novelists, story writers, screenplay writers – we’re all about pressuring our characters. Letting them do stupid things, suffering the consequences when they do – or coming to the cliff of stupidity and stepping back.

I wrote in Books, Crooks & Counselors about two well-known cases of filing a false police report: the Runaway Bride, and the Balloon Boy incident. Their prosecution, guilty pleas, and sentencing were widely publicized. But criminal stupidity continues.

In Missoula, Montana, a 22 year old pled guilty to falsely reporting that he’d been beaten by three men outside a local bar when he asked where to find a gay bar.

The specific charge was making a false report to law enforcement, a misdemeanor. Remember that the names and elements of similar crimes vary state to state.

The Missoulian, which reported the story, notes that the report prompted fear among the GLBT community, when the report and a photo of the man’s bruised face circulated on line. Police recognized that fear, and filed charges immediately when they received a video, two days later, showing that the man injured himself when attempting a backflip off a street curb. (Inspired by watching too much Olympic gymnastics while drinking too much alcohol? I speculate.)

I appreciate the statement by Missoula Police Lt. Scott Brodie that “The decision to file criminal charges was due in part to the sense of fear and anger that quickly developed after Baken had identified a specific business and possible suspects in his allegations.” Missoula Police Chief Mark Muir thanked the community for its cooperation, and said the plea “will hopefull allow the GLBTI community some needed relief from the fear that was virally spreading across the country.”

Why make a false report? Reasons vary. In this instance, it’s hard to see what benefit the man expected. Other defendants have filed reports to cover up other crimes, seek revenge or cause trouble for someone else, provide an out, as in the case of the Runaway Bride – or position the family for a TV reality show, as Balloon Boy’s parents reportedly intended.

I found no reliable statistics on the number of false reports. Most incidents will be misdemeanors, subject to less than a year in jail–typically far less–and a fine up to $1,000.

Do you know the online magazine Kings River Life? You don’t? Check it out! Editor Lorie Ham loves mysteries, and publishes mystery stories regularly. She also reviews mysteries and gives away books. This week, check out the review of Books, Crooks & Counselors, and my essay on writing the book. And if you don’t have a copy yet, enter her drawing for a free book — thanks to the publisher, Quill Driver Books!

No post on a legal topic this week — I’m off celebrating submitting my first mystery, Book One of The Food Lovers’ Village Mysteries, to my publisher. Working title: The Food Lover’s Guide to Murder & Mayhem. It’s set to debut from Berkley Prime Crime in the summer of 2013.

See you next week!

“Your character is always right. No real person thinks they’re being stupid or misguided or bigoted or evil or just plain wrong – so your characters can’t, either. If you’re writing a scene for a character with whom you disagree in every way, you still need to show how that character is absolutely justified in his or her own mind, or the scene will come across as being about the author’s view rather than about the character’s. You can’t make the judgment that your character is wrong; let the readers do that for themselves.”

I’ve written before about witness tampering, something we see regularly in crime fiction. A character tells another to keep her mouth shut, or hints that she – and her family and her cat – will live longer if she forgets what she saw.

What’s the potential punishment? In Billings, Montana, a man who told a witness in a federal grand jury drug investigation to keep his mouth shut got 40 months in prison. The guideline range maxed out at 37 months, but they are guidelines – and the judge chose a longer sentence because of the man’s criminal record.

Use or threat of a weapon is likely to result in a much longer sentence. In another federal case, the defendant was convicted of witness tampering and using a firearm in a crime, after taking three large friends to the apartment of a witness in a drug case against another man, sticking a gun in the witness’s face, and warning him against saying anything about the case. He got 46 months for the tampering with an additional mandatory 7 years for use of the gun.

Remember that the names and elements of charges vary. In a state court case, a man was convicted of felony tampering with a witness and informant, but acquitted of intimidation. A man was given a necklace, which he later took to a pawn shop, only to discover that it had been stolen from that same pawn shop several months earlier. He called the man who gave it to him, who came to his home and threatened to hurt him if anyone spoke to the police. The threat-maker had a long criminal history, and was awaiting trial on other charges. He received a sentence of 20 years, 5 suspended. The judge rejected the prosecutor’s suggestion of 30 years, 10 suspended, as too harsh, because the man had no history of violence, but also rejected the parents’ plea for leniency based on drug and alcohol problems, finding that he needed close supervision.

You may need your character – a goodie or a baddie – to threaten or intimidate a witness or information. Raise the stakes by knowing the potential charges and sentences.

“I give you permission to write crap, because it’s the best fertilizer. And from it, you can grow something amazing.”

— Pat Pattison, songwriting instructor at the Berklee College of Music