When is a crime a hate crime? Don’t all crimes, in some sense, arise out of hate? Should we as a society treat certain crimes more harshly when they are motivated by bias or hatred against people because of their religious beliefs or immutable characteristics such as race, gender, or sexual orientation? Does a specific motivation make criminal actions worse, and deserving of greater punishment than a similar crime which lacks that motivation but has the same result? Are we then punishing thought, or speech, rather than action?

These are some of the questions writers who include hate crimes in their stories need to consider. Some resources to guide you:

Patchy reporting undercuts national hate crimes count — This AP article reports that FBI stats note 5-7,000 hate crimes a year, with about half of victims targeted by race, but under-reporting is rampant. More accurate statistics would increase awareness as well as resources for law enforcement training and community outreach.

Resources from the FBI: The FBI defines hate crimes this way:

A hate crime is a traditional offense like murder, arson, or vandalism with an added element of bias. For the purposes of collecting statistics, the FBI has defined a hate crime as a “criminal offense against a person or property motivated in whole or in part by an offender’s bias against a race, religion, disability, sexual orientation, ethnicity, gender, or gender identity.” Hate itself is not a crime—and the FBI is mindful of protecting freedom of speech and other civil liberties.”

The site includes stats, cases and examples, and more.

The National Crime Prevention Council’s hate crime page notes: “The U.S. Department of Justice defines hate crime as “the violence of intolerance and bigotry, intended to hurt and intimidate someone because of their race, ethnicity, national origin, religion, sexual orientation, or disability.”

Forty-one states and the District of Columbia have laws against hate crimes. This means that if bias is involved, a crime such as vandalism, assault, or murder is also a hate crime, and the penalty is more severe than it would be otherwise.”

The page includes strategies on prevention, talking to kids, and a report from Washington State on the impact of improved relationships between law enforcement and minorities.

And the Human Rights Campaign looks at crimes against the LGBT community, and others. Good state-by-state links to laws and policies. 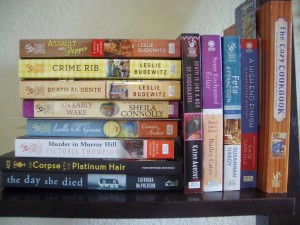 And we’ll close the month with another quote from a bookmark used by the departed Books West in Kalispell, Montana:

“Nature and books belong to the eyes that see them.” 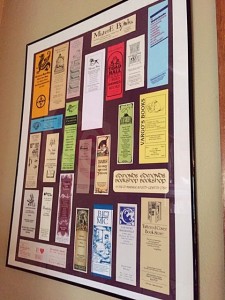 “To read a writer is not merely to get an idea of what he says, but to go off with him, and travel in his company.”

(Photo by author Bailey Cates, of a portion of her bookmark collection) 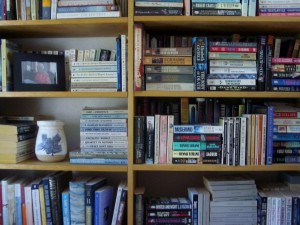 Another favorite from an indie bookshop, this one Once Upon a Crime in Minneapolis:

Many independent bookstores feature quotes on their bookmarks. I’ll feature a few from my shelves this month. This one came from the Elliott Bay Bookstore in Seattle.