Celebrate with me, friends! Death al Dente has been nominated for the Agatha Award for Best First Novel! The Agatha Awards are given at the Malice Domestic convention — a celebration of the traditional mystery — in early May.

Congratulations, too, to all the other nominees. http://mysteryreadersinc.blogspot.com/2014/01/agatha-award-nominees.html (Sorry — still haven’t solved my linkage problem!)

Thanks for all your support — including your readership, your encouragement, and your word of mouth. Writers need readers and I’m so grateful for each of you.

A few weeks ago, I wrote a post about the origins of raising our right hands when we take an oath. http://www.lesliebudewitz.com/?p=1546 A writer friend, Edith Maxwell, reminded me that Quakers, also known as Friends, do not take oaths. One of their fundamental beliefs is “The Testimony of Integrity,” which holds that telling the truth is a given. Taking an oath contradicts that testimony by suggesting that not telling the truth is even an option. They attribute this belief to Jesus and the Sermon on the Mount, Matthew 5:37. (“Let your yes be yes, and your no be no.”) The idea is that one’s veracity should be judged based on reputation for truthfulness. But of course, in modern society, we often don’t know each other or the reputation of the witness in the dock.

Friends, she points out, will “attest” that what they are saying is true — they just won’t swear it. Other folks also balk at the conventional oath, requiring them to “swear” that their testimony or statements are true, mainly for religious reasons. For this reason, many courts now use the language “Do you swear (or affirm) that the testimony you are about to give is true?” In some courts, witnesses may need to ask for special language. Some courts require witnesses to give a reason why they prefer to affirm rather than swear, although that’s an increasing minority. Legal documents, including standard notary language, may include only the option to swear, although I have seen witnesses cross that out and handwrite “affirm.” In the law, an affirmation is considered legally binding, thus avoiding any objections.  The U.S. Constitution even makes several references to affirmations. Franklin Pierce is the only American president who affirmed the oath of office.

The usual answer to the question “Do you swear or affirm …” is, of course, “I do.” But another writer friend, Barb Goffman, recalls being asked during the swearing-in ceremony to the Maryland State Bar to repeat the phrase “I swear or affirm …” — and some of her classmates repeated it verbatim, rather than choosing to swear or choosing to affirm.

And writer Laura Hernandez says that in a death penalty case she worked on, a witness wanted to affirm rather than swear, resulting in questions to prospective jurors on their opinions about what that meant. To her surprise, some people thought a person who “affirmed” was hiding something! I suspect that the judge in such a case would give what’s called a “cautionary instruction,” at the beginning of the case, telling the jurors that the law allows witnesses to affirm rather than swear, that they should draw no conclusions about the witness’s reliability from that choice, and that affirmed testimony should be viewed in the same way as sworn testimony.

Can you use tension over an oath to add dimension to a court scene you’re writing?

The writer has to take the most used, most familiar objects—nouns, pronouns, verbs, adverbs—ball them together and make them bounce. 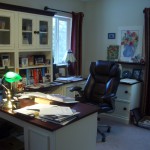 “I was once told that the surest aid to the writing of a book was a piece of cobbler’s wax on my chair. I certainly believe in the cobbler’s wax much more than inspiration.”

And I’ve got to pair that with one of my favorite writing quotes ever, even if I’ve quoted it here before:

“I only write when I’m inspired, and I see to it that I’m inspired at nine  o’clock every morning.” 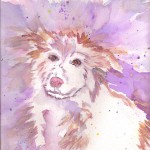 Curious phrase, isn’t it? When we had dogs — two Border collies and Alfre (shown), a Retriever-Samoyed mix — I often looked at them and thought “that’s how I want to work — eat, nap, chase a few squirrels, nap, go for a walk, nap.”

Joking aside, who doesn’t admire service dogs? The Dec-Jan issue of the Washington State Bar Association journal, now called the NW Lawyer, introduced me to the concept of Courthouse Dogs. 49 dogs now work in 21 states and other locations, with add’l programs under development. The trained dogs may comfort a witness — they are particularly good for children testifying against abusers or witnesses with extreme anxiety. The Washington Supreme Court upheld the use of a “facility dog” in the courtroom in a burglary case, where the victim suffers from developmental disabilities and was extremely anxious about testifying. His own service dog accompanied him. The defense objected, arguing “undue prejudice,” compromise of the defendant’s right to confront his accuser, and an aura of sympathy. The Court found for the dog.

But the concerns about the effect on the right to a fair trial are legitimate. Courts have addressed them in several ways — influenced in part by experience with other types of service dogs in the courtroom. The dog may not need to be in the witness box; if it is, it’s typically not visible to the jury. Judges can give “cautionary instructions,” telling the jury not to consider the dog’s presence. And of course, defendants and their witnesses have the same rights to a dog’s presence as witnesses for the prosecution.

Can you use a service or facility dog, or an argument about one, in your story? How will your characters respond? These dogs bring comfort; how can you can use to add tension? 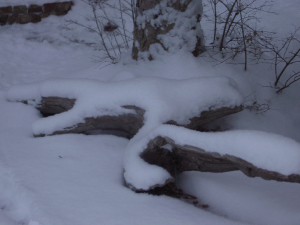 “Imagination is everything. It is the preview of life’s coming attractions.”

I’ve written before about social media and the practice of law (The Case of the Juror with the Twitchy Thumbs — the Oregon juror sanctioned for sending Tweets from the jury box, and Investigating with Social Media). But two recent cases illustrate the dangers to lawyers of misusing Facebook and other social media.

A Montana lawyer, whom I do not know, filed a lawsuit on his own behalf against a construction company. According to this news account, he then threatened to harm the District Court judge assigned to his case and her house, on his Facebook page, apparently to get the judge to recuse herself from the case. Instead, he was charged with a felony count of obstruction of justice. He pleaded no contest to a misdemeanor count of violating the privacy of communications. According to the AP account, he received a deferred sentence and was ordered to turn in his license to practice law in Montana.  (Deferred sentences and lawyer discipline are both discussed in Books, Crooks & Counselors.)

Update, November 2016: The lawyer involved has contacted me twice, saying he made no threats and asking if I would like his side of the story. Since my purpose here is only to alert writers of potential story lines for plots, I am not engaging in any conversation with him, but have removed his name from the original post. Writers, remember that there are as many “sides” to a story as there are people involved. Remember, too, to explore your characters’ psychology and emotions, which drive their actions and as as important to a novel is as plot.

And last year, in a case involving abuse of social media, a lawyer in Virginia named Matthew Murray was ordered to pay a fine of $542,000 and his client Isaiah Lester a fine of $180,000, with a $10 million dollar jury verdict in Lester’s favor, resulting from the death of his wife in a collision with a cement truck whose driver lost control, reduced nearly in half.

Why? “Spoliation of evidence,” meaning intentional destruction of evidence. After getting a discovery request for Lester’s Facebook pages and profiles, Murray directed him to “clean up” the account to remove any evidence that could damage the case — including pictures of Lester out at a bar with friends after his wife’s death wearing a T-shirt  “I [heart] hot moms” while holding a beer — and withholding the evidence from the opposition and the court. Judges get cranky about things like that.

An aspect of spoliation that might help you stir up trouble on the page: if evidence is destroyed and can’t be recovered, the law assumes that it would not have been favorable to the party who destroyed it — and so instructs the jury. (This is why any party who wants to do destructive testing, as in a products liability case, should get a court order or written consent from the other side, and often includes the other side’s expert in the testing.)

Murray also resigned as managing partner of his law firm and is under investigation by the Virginia State Bar.  More about the case, Allied Concrete Co. v. Lester, from bloggers here and here. Read the Virginia Supreme Court’s opinion here.

If you want to cause trouble for your fictional lawyer, try this at home.

“My ideas usually come not at my desk writing but in the midst of living.”