Is impairment from a “date rape” drug a potential defense to a DUI charge? A majority of the Montana Supreme Court recently held that a woman charged with DUI was entitled to put on evidence showing that she had been unwittingly given the drug GHB that caused her impairment, and to argue that she had not intended to commit a voluntary act by driving. The issue is not the source of her impairment, but whether she voluntarily chose to drive.

Voluntary intoxication, of course, is not a defense–but involuntary intoxication might be. The defense, called “automatism,” had been recognized by courts in other states, but not previously allowed in Montana. It means that where the law prohibits a voluntary act–such as driving under the influence–a defendant may be allowed to show that his or her acts occurred “during convulsions, sleep, unconsciousness, hypnosis, or seizures,” and thus was not voluntary. The Court said that allowing her to present the defense would prevent the criminalization of conduct that was without fault, and prevent her from being held criminally liable as a result of another person’s acts.

Will she prevail? No way to tell at this stage. The case was sent back to the trial court–in her case, a municipal court. She’ll need testimony from independent witnesses, such as others who were with her and can testify to how much she drank, who else was present, and other facts. She’ll also need medical or pharmalogical testimony establishing her alcohol levels, the presence of any other drugs, and their effects. The judge will then decide if she’s presented enough evidence of the defense to go to the jury–solely on the question of whether she drove voluntarily.

More details on the case from The Missoulian. The Montana Supreme Court opinion is here. (Revised link — in the middle of the page, click on the green citation reading “2012 MT 265, right above “City of Missoula.” Note that this is technically an unpublished opinion, meaning not that it can’t be read or shared, but that it can’t be cited as precedent in future briefs or decisions, because of the procedural status of the case. Let me know if the link breaks.)

Although judges tend to be secondary characters in the novels they appear in, readers and writers alike are fascinated by them. Books, Crooks & Counselors includes a chapter on thinking like a judge, and I’ve continued to get questions about how judges might rule or respond in particular situations.

So today I’m linking to an issue of The Montana Lawyer, the monthly magazine published by the Montana State Bar, that highlighted the careers of two prominent Montana judges who died late last year, and some aspects of their jobs that bothered, motivated, and cheered them. The article on state Supreme Court Justice John Harrison starts on p. 5, and a former law clerk’s appreciation of Judge Joe Gary starts on p. 14. 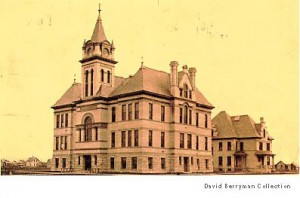