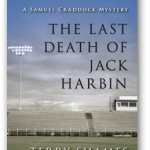 An occasional series in which I share a recent read I loved.

I picked this book up for two reasons: Author Terry Shames was the moderator for a panel discussion on small town crime that I participated in at the Left Coast Crime mystery convention in Portland, March 12-15, and I like to be familiar with the work of others on the panel. And her first book, A Killing at Cotton Hill, won the 2014 Macavity Award for Best First Mystery and was nominated for the 2013 Left Coast Crime Best First award. As a Best First winner myself (Death al Dente won the 2013 Agatha Award for Best First novel), I love reading other new writers.

But even before I met her, I knew Terry Shames was an old hand. Why she hadn’t been published before, I have no idea, but this is a writer with great control. Samuel Craddock is the retired police chief of Jarrett Creek, Texas, a fairly recent widow with a bad knee and a reputation as a kind man who gets to the bottom of things. In The Last Death of Jack Harbin, we meet a cast of characters who have run up against some of life’s rougher edges. Some respond better than others, of course, letting their scars make them more human, gentler rather than harsher. It’s this variety of responses that I most enjoyed in Shames’ novel.

I have not been to Texas, but I feel I know Jarrett Creek. People are people pretty much everywhere, but they have their own local variations, and Shames portrays them clearly—they are recognizable without being cliched. Small town relationships and routines, the importance of high school sports even 20 plus years later, the military veterans, the religious fanatics, the men and women who fall beneath the cracks and the men and women who pick them up. They’re all here.

As I said, control is the Shames’ hallmark. There’s a little violence, yes, but only what’s needed. Emotion, setting, clear and vibrant language, backstory—we’re given pretty much all we need to understand these characters, and nothing superfluous. The mystery is solid; the secrets of the past keep coming. And Samuel Craddock is a crackerjack of a character.

Take the trip to Jarrett Creek. If you like a good mystery, I think you’ll be glad you did.