LAW & ARDOR: Writing about legal themes? An attorney identifies 10 common mistakes to avoid in your fiction (Originally published in The Writer, September 2013)

If you’re writing fiction, chances are a legal thread runs through your story. On screen or on the page, legal issues are often central to plots and backstory.

In mysteries and thrillers, past crimes may surface with present ramifications. Law enforcement officers and P.I.s need to know what’s legal and what isn’t. Amateur sleuths—the chef, gardener, or librarian—may start digging because they fear police won’t investigate or will nab the wrong suspect.

The law figures in mainstream and literary novels, too. And legal plots don’t require a crime. With a good storyteller, civil law can be gripping. Think of the possibilities in adoption (Jacquelyn Mitchard’s A Theory of Relativity; Ann Patchett’s Run), inheritance (Dickens’ Bleak House), even insurance (Double Indemnity, Billy Wilder’s movie based on James M. Cain’s novella).

But the law can be confusing, too. It changes constantly, and varies from state to state. Information and misinformation abound. Plus most of us, thank goodness, live happy lives without facing serious legal trouble. What follows is one lawyer-novelist’s list of common mistakes—and tips on avoiding them.

1. Using the wrong terms to identify prosecutors and courts.
On  TV’s Law & Order—and I love the show—the prosecutor is the D.A. In other stories, she may be the county attorney or prosecutor, the state’s attorney, even the people’s attorney. A  handle like commonwealth’s attorney might be shortened to “the prosecutor.” Does she try cases in District Court, Circuit Court, or Superior Court? If the terminology baffles you, call the court or prosecutor’s office, the state bar, or a law professor. You may even find a source to answer future questions.

2. Assuming law enforcement officers need a warrant to make an arrest.
Police don’t need a warrant to make an arrest in a public place, or in “exigent circumstances,” such as when an officer witnesses a crime or pursues a suspect. But police still need probable cause—that is, a reasonable belief, based on facts, that a particular person is responsible for a particular crime. “Mere suspicion” is not enough.

An illustration: You tell your kids not to eat the brownies until after dinner. You see your son snatch one—direct evidence of disobedience. You don’t see your daughter touch the plate, but you spot chocolate smears around her mouth and crumbs on her shirt—circumstantial evidence.

In both civil and criminal law, circumstantial evidence may be enough to make the case. If the other side objects, the judge must rule on whether to allow (admit) it or not. The standard is relevance: Does it make facts that matter to the case more or less probable?

4. Giving every suspect a Miranda warning.
A warning is required only before custodial interrogation. In other words, only persons in custody need to be warned, and even then, only before questioning. Voluntary statements by persons not in custody or not made in response to questioning are admissible. A suspect who’s been warned may waive his rights and agree to talk. Of course, mistakes are fodder for defense lawyers—and writers.

5. Failing to distinguish between state and federal crimes.
A crime doesn’t get to be federal just because it’s important. Federal crimes are violations of federal statutes. They include many (but not all) drug and firearms offenses, kidnaping across state lines, and offenses related to securities or banking, immigration, war, terrorism, or interstate communications, or occurring on federal property. Regulatory offenses, such as pollution violations, may be federal crimes. If a crime violates state law, the state prosecutes. Some conduct may violate both state and federal laws, triggering a tug-of-war over jurisdiction. State court systems handle the majority of civil and criminal litigation—about 95%.

If your fictional crime is set in Indian Country, do your research. While the FBI investigates crimes on many reservations, as in Tony Hillerman’s Leaphorn and Chee novels, state authorities exercise full or partial jurisdiction on others.

6. Assuming a felon can’t vote or own a gun.
Restoration of civil rights—including voting and gun ownership—after a felony conviction is complex. The Sentencing Project, a national organization promoting sentencing reform, estimates that full or partial state bans—many applicable even after a sentence has been fully served—deny the vote to 5.8 million people and have a disparate racial impact.

While federal felons are barred from gun ownership for life, state law varies widely. Some states prevent or limit gun ownership by persons convicted of violent felonies, but allow it after the sentence is served, including probation. Waiting periods may apply. Court process may be required. Some states permit ownership of hunting rifles but bar handguns.

Debate rages over the constitutional implications of voting and gun restrictions and their effect on a person’s ability to re-enter society. Does your character live in fear of an ex-con ex-husband with a gun—or worry that she can’t buy a gun to protect herself because of her own record? Is your fictional legislator’s re-election in dispute because a faulty list prevents hundreds of ex-felons from voting?

Change will continue, so check your story state’s laws.

7. Referring to guilt in a civil suit for damages.
A criminal defendant will be found guilty or not guilty (not “innocent”). A civil defendant is either liable for the plaintiff’s damages or not—the concept of guilt does not apply.

Unlike criminal guilt, civil liability is not all or nothing. In a personal injury claim, the jury may decide that the plaintiff—the party bringing suit—contributed to her injuries by her own negligence. If her negligence reaches a certain level—typically more than 50%—she may be prevented from recovering damages. Multiple defendants may share liability.

Picture a slip-and-fall: A shop owner fails to shovel her sidewalk and allows ice to form. A woman falls and breaks her arm—but she walked there daily, knew the danger, and was on her phone. A neighboring shop owner had promised to shovel, but forgot. Who’s liable, meaning who pays? The jury decides.

8. Sentencing a defendant minutes after a criminal conviction.
Sentencing is a separate proceeding, usually held after a pre-sentence investigation by a probation officer or other investigator (terminology varies). Prosecutors and defense counsel need time to review the report and make recommendations. A few weeks is typical. Sooner is possible—Casey Anthony was sentenced a few days after the verdict, but the charges she was convicted of were relatively minor and circumstances may have triggered an expedited proceeding.

Sentence may be imposed right away if a defendant enters into a plea agreement—but only after lengthy negotiations that include evaluation of all the factors that go into a pre-sentence investigation.

If you need sentence imposed quickly to get your character to prison, build in facts that let you do so. Just don’t let your fictional judge hear the verdict and impose sentence without taking a breath.

9. Allowing lawyers—or their clients—to argue with the judge, especially after she’s ruled.
Don’t do it—not if you care about your characters or their case. But if you want to irritate your fictional judge, go ahead. Your chances of success are excellent.

And don’t let your characters interrupt in court, unless you want them hauled to the slammer for contempt.

10. Introducing new evidence on appeal.
Appeals are decided strictly on the record below—meaning the evidence, including testimony, and legal arguments. Parties to an appeal may not present new witnesses or argue legal issues not previously raised. As part of its decision, though, an appellate court might order the trial court to reopen a case to consider evidence or arguments previously excluded.

In a criminal case, new evidence may surface weeks, months, even years after conviction. Other procedures exist to ask a judge to reopen a case after the appeals process has ended.

Is it ever okay to make a mistake on purpose, to fool the reader? Not in my book. Exaggerate a bit for drama, sure, but deliberately building a story on a faulty premise breaks faith with the reader. As prosecutor turned novelist Marcia Clark said in a panel discussion on forensics in fiction, “The more we tell the truth, the more dramatic it is.” We don’t need to lie about the facts to tell a good story—we need to find the story they tell.

Writers who take time to check legal terms and principles will discover terrific opportunities to twist, deepen, complicate, or simplify their stories. Getting the details right can make all the difference.

Tracking Down Those Pesky Details

– The National Center for State Courts website includes directories of all state court systems with court structure charts, and of public defender systems.

–The NRA maintains a directory of state gun laws.

– For state-by-state specifics on recording conversations, see this guide from The Reporters Committee for Freedom of the Press.

– The FBI maintains a directory of state and tribal sex offender registration laws.

Leslie Budewitz, a practicing lawyer, won the 2011 Agatha Award for Best Nonfiction for Books, Crooks and Counselors: How to Write Accurately About Criminal Law and Courtroom Procedure. Her  mystery Death al Dente is set in Northwest Montana, where she lives.

Next month I’ll post the sidebar to The Writer article: my list of 10 great novels on legal issues. 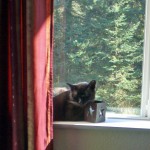 This week, the guitar takes over the Flathead Valley, as the Crown of the Continent Guitar Festival and Workshop swings on to center stage. It’s a magical event, for music students like my hunny, who’s in the singer-songwriter class, and music lovers like me, out late every night at a concert to die for: Scott Tenant and the LA Guitar Quartet, Lee Rittenour and Robben Ford, the Pat Metheny Trio, Rittenour playing with Darryl Steurmer, and Saturday night, Livingston Taylor and Mac McInally.

Me, I’m treating Music Camp week as Writing Camp and getting back to the page. Yay! But you can read my article on recipes as story-telling in the new issue of 406 Woman, available free throughout the Flathead Valley — and don’t miss the piece on Linda Manzer, a Canadian luthier who’s here at the Festival this week. Metheny has more Grammies than any other musician — and Manzer makes his guitars!

This week, Mr. Sandburg — aka The Cat — talks about the move to Montana and his transition from City Cat to Country Cat on Killer Characters: Where the Cozy Characters Speak. Leave a comment on my post at Killer Characters for a chance to win a signed copy of Death al Dente; the cat will stick a paw in the fishbowl to pick a winner Wed evening.

Thanks for joining me on this amazing journey!