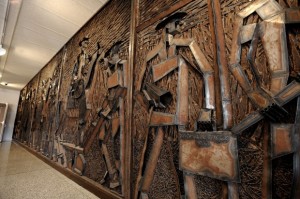 Have a hankering to pound a gavel on a bench? To slide your bottom across old wood pews made glossy with decades of use? To huddle in your own private holding cell? Or just to own a former federal courthouse? Now’s your chance. The GSA is selling the 221,000 square foot building in Billings, Montana to the highest bidder. It even comes with a sculpted metal wall mural of Montanans at work. (And with a ton of asbestos, although if the buyer doesn’t alter the building much, removal is apparently not required.) More specs and photos from the Billings Gazette.  And no, I have no idea how you might use this in your fiction — but I thought you’d want to know anyway!

(Photo of Lyndon Pomeroy mural from the Billings Gazette.)

The Billings (Montana) Gazette gives us today’s Stupid Criminal Trick, reporting the case of a 24 year old man “who says he doesn’t remember breaking into the new federal courthouse while it was under construction.” He claimed to have been out with friends, then became separated from them, before blacking out. Meanwhile, though, he apparently broke three second-floor windows with a metal pipe and discharged a fire extinguisher, then passed out, wearing only jeans, on the first floor, where he was found and arrested.

He was initially charged with criminal trespass and burglary, but pled no contest to an amended charge of felony criminal mischief and offered a check for restitution–$10,738. He was given a 12-month deferred sentence and ordered to undergo a chemical dependency evaluation, and obtain any treatment recommended. The misdemeanor charge of criminal trespassing was dismissed.

As one commenter noted, that was a pricey fire extinguisher.