Welcome back to Law & Fiction: the Blog author and forensic scientist Lisa Black, whose experiences as an expert witness remind lawyers to be verrry considerate of our experts, and give both writers and readers an insider’s view of the criminal justice system. Her newest novel, THAT DARKNESS: a Gardiner and Renner novel , releases tomorrow, April 26. 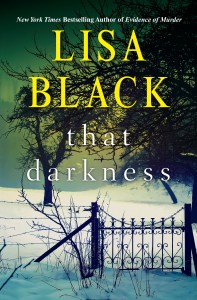 I have testified in court as an expert witness approximately sixty times in my 20 years as a forensic scientist, and I can positively state that I would rather respond to the scene of a decomposed hoarder death in a house skittering with roaches and bedbugs then present myself in court for any reason whatsoever. At least I’d only be surrounded by trash and bad smells for an hour or two, whereas a court appearance can stretch into days.

There’s absolutely nothing fun or glamorous about it. You are jerked away from whatever it was you were doing (work, your day off, a vacation) and plopped into a cold, boring room in the cold, boring courthouse. If you’re lucky the room has a window and a minimum of chatty co-witnesses. You have to stay there for as long as the attorneys think they ‘might’ need you and will be freed only after at least one of them has done their best to make you look incompetent at best and conspiratorial at worst. The whole experience, quite frankly, sucks.

And it’s the most important thing we can do. All the crime scene work, swabbing up blood, wearing surgical masks to be able to breathe amid the stench, straining our eyes staring at fingerprint ridges for hours upon hours—all these things count for nothing if they don’t stand up in court.

But that’s the big picture, and usually I’m stuck in the pixels.

The waiting isn’t so bad when it isn’t your vacation you’ve been pulled away from, and you’ve prepared by bringing snacks, change for the pop machine and a book to read. I’ve taken my laptop along and gotten my writing done while waiting (though you may have to dodge those chatty fellow witnesses). If you have a smartphone, I highly recommend downloadable e-audiobooks from your library system (heaven!!). Our courthouse even has free wifi for surfing the web or answering email.

Also sometimes I have to go on Mondays, when our local courthouse does all the ‘housekeeping’ kind of stuff—pleas, motions, continuances—to collect a defendant’s palm prints or footprints, which the regular court bailiffs don’t do. This is the only kind of non-stressful court appearance I have since no one is going to ask me questions and I get to sit inside the courtroom for a change. There I can watch a sometimes interesting parade of people and hear the mini-synopsis of their predicament, such as the guy who got into an argument with someone, called 911, and as the officer arrived to explain that 911 was only for emergencies, called 911 three more times to complain about being told not to call 911.

What drives me to distraction, however, is my increasing appearances in court for sentencing hearings. When a person is convicted after a trial or plea, their fingerprints (not palms) are rolled in open court as an official record that this, indeed, is the person who was convicted in this particular court case. When they are convicted again, before they are sentenced, the prosecutor wants to establish that they have prior convictions so that the sentence can reflect that. So I have to compare the in-court prints from that conviction not yet sentenced to the in-court prints from one or two or five prior convictions. This is a minor thing, an easy comparison since the prints are usually decent and if, say, the right thumbs are smeared, you have nine other fingers to choose from. However I still have to do the comparison, hand it off to another examiner to re-do and therefore verify the comparison,  write the report, give it to my verifier to check and initial, then give to my supervisor to check and initial, make a copy for me, contact the court liaison to tell him he can pick up the report, then go to court and wait a half-hour or hour or two, then put up with the defense attorney complaining about my report (not long enough, too long, I made a typo in the birth date) as if he or his client is really suggesting that they are not the person incarcerated on these previous charges—because if they weren’t, surely they would just say so.

Yes, I whine. But this does represent an outlay of taxpayer-paid time, and not just my time—my co-workers, the attorneys, the judge, the jury—and all to prove something that is already documented and that no one is questioning.

Attorneys have told me that this practice, which only began about four years ago, is due to some court decision, but I don’t believe it. I think it’s something they do ‘just in case’ it may prove to be a point of appeal. They’re trying to protect their body of work, but meanwhile more and more cases are dropped or plead down to nothing because the court’s schedule can’t handle them all. Sometimes crossing every t and dotting every i means that other t’s and i’s suffer.

Another new practice of the extreme stating of the obvious is asking ballistic experts to take bullets apart and then testify to the fact that they are bullets, with a slug and gunpowder, etc., to be used in a firearm. This is apparently requested when the use of a firearm is part of the charge or sentencing considerations, and in addition to verifying that the firearm itself is functional. After all there are several reasons why a firearm might not be able to fire as well as very realistic looking air guns—but nothing else quite looks like a bullet. And if the defendant wants to make the case that his bullets were not functional, he can, again, say so. Then order the testing. But to do it reflexively in every case adds up to a colossal waste of time and resources.

So, yeah, I don’t really enjoy going to court!

(A reminder to writers: local practices vary, and the new procedures Lisa has encountered in Florida are not required everywhere, so talk to a local expert before using them in your scenes!)

That Darkness is now available wherever books are sold!

It seemed like a typical week for crime scene specialist Maggie Gardiner–a gang boss shot in an alley, a lost girl draped over an ancient grave, a human trafficker dumped in the river–nothing all that out of the ordinary for the Cleveland police department as spring turns toward summer along the Erie banks. The methods are usual, the victims unsurprising–but when she notices a pattern, a tenuous similarity among the cases, she begins to realize that her days will never be typical again. How much of her life, her career, her friends, will she be willing to risk to do what’s right?

Jack Renner is a killer who does not kill for any of the conventional reasons…no mania, no personal demons. He simply wants to make the world a safer place. He doesn’t think of himself as a dangerous person–but he can’t let anyone stop him. Not even someone as well-meaning as Maggie Gardiner.

Maggie has the self-sufficiency of a born bit-of-a-loner. She works with a bevy of clever experts surrounded by armed police officers.        She is both street smart and book smart, having seen the worst the city has to offer.

But Maggie Gardiner is not safe. And, until she can draw Jack Renner into the light, neither is anyone else.

Jeff Lindsay, author of the Dexter series, says: “Lisa Black always delivers authentic characters in riveting stories. That Darkness takes things to a spellbinding new level with a taut and haunting story that will stay with you long after you finish reading it.”

“Black is one of the best writers of the world of forensics, and her latest introduces Maggie Gardiner, who works for the Cleveland Police Department. Her relentless pursuit of answers in a dark world of violence is both inspiring and riveting. Readers who enjoy insight into a world from an expert in the field should look no further than Black. Although Cornwell is better known, Black deserves more attention for her skillful writing – and hopefully this will be her breakout book.”– RT Book Reviews, 4 Stars (Top Pick)

Lisa Black has spent over 20 years in forensic science, first at the coroner’s office in Cleveland Ohio and now as a certified latent print examiner and CSI at a Florida police dept. Her books have been translated into 6 languages; one reached the NYT Bestseller’s List, and one has been optioned for film and a possible TV series.

And yep, that’s her looking like a happy chimney sweep!