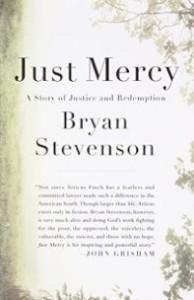 I write occasionally about people who fight for justice—especially if they might make good characters in novels—and I’ve mentioned Bryan Stevenson and his work with prisoners on death row and other issues related to justice and inequality. Last month at the annual American Library Association convention, the ALA awarded Stevenson its Andrew Carnegie Medal for Exellence in Nonfiction for Just Mercy: A Story of Justice and Redemption (Spiegel & Grau). Publisher’s Weekly reprinted his acceptance speech, asking “Is this the Greatest Book Award Acceptance Speech Ever?” His comments illustrate some of the statistics related to his work, but mostly he tells us—he shows us—what working for justice really means. Read it.

Last March, I discussed the case pending before the Supreme Court challenging state statutes mandating life in prison without the possibility of parole for juveniles convicted of murder.

Earlier this week, in Miller v. Alabama and Jackson v. Hobbs, the Supreme Court held 5 to 4 that the Eighth Amendment ban on cruel and usual punishment bars mandatory life sentences for homicide offenders under 18 at the time of their crime. Both defendants were 14. The decision builds on earlier cases holding that because young offenders lack the maturity and judgment of adults–and have greater capacity for rehabilitation–they should not necessarily receive the same punishment. (Books, Crooks & Counselors discusses the first case, Roper v. Simmons (2005), striking down the death penalty for juveniles.)

I want to stress that this ruling does not mean no juvenile can be given a life sentence without parole or LWOP, as it’s sometimes called. It holds only that a state may not make such sentences mandatory.

Instead, sentencing must take into account mitigating factors (discussed in Books, Crooks & Counselors), such as age, personal history, immaturity, or duress.

Judges tend to dislike mandatory sentences, because they take away judicial discretion to consider factors unique to the case or defendant. This ruling assures that sentences are tailored to the particular facts of the case, including both the crime and the defendant.

For further details, see the analysis in the SCOTUS blog and this Washington Post report.

How can you use this in your stories? Consider the family of your juvenile offender–or the family of his victim. Play out the debate in real time, or after the crime–look to the dissents for fodder. Create tension in the prosecutor’s office–or the defenders. How does the case hit home for the lawyers, judge, or jurors–who may have teenagers of their own? Bring in racial and socio-economic factors. What about public reaction? And if you’re looking for a model of a passionate, driven defense attorney, consider Bryan Stevenson, profiled in this Washington Post story. Stevenson has long represented young offenders sentenced to death or LWAP, and led the fight for Miller and Jackson–even though when he was 16, his own grandfather was murdered by four teenagers in Philadelphia.

Update to the update: FOB (Friend of the Blog) Hank Phillippi Ryan sent me this Boston newspaper interview with prosecutors and defense counsel, including her husband Jonathan Shapiro, about the impact of the decision.  Shapiro represented a teenager sentenced to LWAP for murder; his sentence will now be revisited.