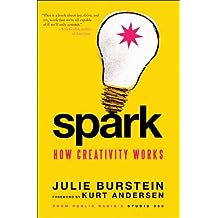 A few weeks ago, I read Spark: How Creativity Works, by Julie Burstein (Harper Collins, 2011), based on interviews broadcast by Public Radio’s Studio 360 program, conducted by Kurt Andersen and produced by Burstein. Subjects included novelists, poets, filmmakers photographers, painters, an architect, and others. This month, I’ll quote a few of my favorite observations.

“Lots of things I choose to write about, inevitably they’re something I’ve known about for years but that for some reason or another never migrated into my imagination as something I could use. You could also say that the pantry was getting bare, and I was looking back behind the first row of cans. For me, even if they’re not cataclysmic events—9/11 for instance—events around me have to settle into the ground and then percolate back up through my feet.”