A man tried to rob a pizza place in Helena, Montana, but broke down in tears, telling the cashier he needed money for his family. The cashier talked to him for a while, then gave him pizza, wings, and pop – to go.

Unfortunately, as he started to leave, a large knife fell out of his pocket. Other evidence includes the demand note he gave the cashier. 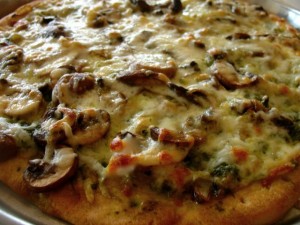 The facts will determine any charges, once he’s caught. But local police are hoping he doesn’t make a habit of threatening robbery to get a free meal.

If he does, he’ll be eating taxpayer food.

Update: Turns out the would-be thief is also a liar. He made up the story about the kids and faked the break-down when he realized the till was nearly empty. It held $24.65.  Geez — or cheese. Some people … .

Story and update from the Helena Independent Record.

2 thoughts on “The Case of the Hungry Robber”