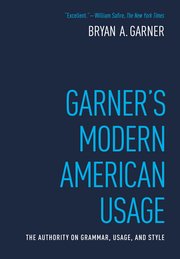 I’m a big fan of Bryan Garner, author of Garner’s Modern American Usage, as well as a respected teacher of legal writing. I subscribe to a daily email service from Oxford Univ Press, publisher of his usage guide, and couldn’t resist passing on today’s entry:

A “suspect” is someone suspected of committing a crime. The person who commits the crime is a criminal (or a robber, thief, murderer, or the like). But in police reports it is common for writers (and, more commonly, broadcast reporters) to describe how “the suspect” committed the crime. Not only is this often absurd (if there is no suspect at that time), it is also potentially false and libelous (if there is a suspect but the suspect is not guilty). Unfortunately, the slack usage seems to be an infection that some writers catch from hanging around police jargon too long — e.g.:

o “When confronted, the other man punched him in the eye. The suspect [read ‘assailant’] fled on foot, leaving the lawnmower.” Jeremy Jarrell, “Woman Reports She Saw Man,” Herald-Dispatch (Huntington, W. Va.), 31 May 2002, at C3.

(Looks like the Oxford email is an advance version of the entries on Garner’s blog, so you can subscribe via Oxford or read the blog, which has an RSS option but no email subscription.)