Today, an update on Barry Beach, the Montana man convicted of a murder — as a teenager, of another teenager — based solely on a confession he says was coerced. Beach denies the crime, but was sentenced to 100 years in prison without the possibility of parole. A District Judge granted him a new trial based on new evidence, but earlier this year, the Montana Supreme Court reversed that decision and ordered Beach back to prison. (See my previous posts.)  Beach, who’d been living and working in Billings, with sponsorship and without trouble for 18 months, turned himself in and returned to prison.

Now, the Billings Gazette reports that Beach is asking the governor to remove the restriction against parole — a form of commutation or reduction in sentence — so he can ask the parole board for release. He’s served nearly 30 years. As I’ve discussed previously,  the Supreme Court in  2012 struck down mandatory life without parole for teenagers, although a sentencing judge can still impose LWOP if he or she finds it appropriate. Beach argues that his 100 year sentence without possibility of parole was the equivalent of LWOP. He points out that he was a good citizen during his 18 months of release, showing that he has rehabilitated himself, and has the ability to reintegrate into society. Many community leaders, including present and former U.S. Senators, support his request. 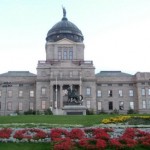 The wrinkle? Governor Steve Bullock — whom I know personally and think well of — was the Attorney General who appealed the grant of a new trial. He says he won’t comment until the Boards of Pardons and Parole reviews the case and sends him a recommendation, and of course, that’s the right response.

I think it beyond unfortunate that there will be no new trial. Beach will always have this conviction in his past. And the family of Kimberly Nees, the victim — and the NE Montana community where both lived — will never have the chance to know whether Beach’s confession to police in Louisiana was coerced, and whether the other suspects might in fact be the real killers.

1 thought on “Update: Barry Beach — wrongfully convicted, or wrongfully freed, and what’s next”