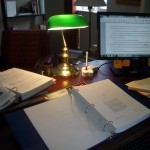 “The novel-writer in constructing his dialogue must so steer between absolute accuracy of language — which would give to his conversation an air of pedantry, and the slovenly inaccuracy of ordinary talkers, which if closely followed would offend by an appearance of grimace — as to produce upon the ear of his readers a sense of reality.”