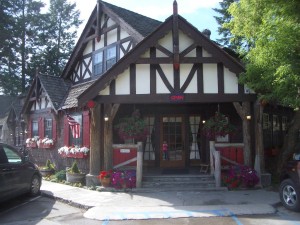 Creating a town based in part on the gem where I live has been a lot of fun. For the most part, I’ve moved things around to create my own vision, and to meet the story’s needs. My friends and neighbors tell me they have a lot of fun seeing what I’ve done, and guessing which businesses and locals I had in mind.

But a few landmark features I’ve left in, though with some changes to fit the story. One is the Jewel Inn, run by Tony and Mimi George. The merchants’ association meets there, under the watchful eyes of a stuffed moose and a trophy antelope. The real Inn does have a few mounts, but those particular heads are ones I’ve added. In CRIME RIB, second in my Food Lovers’ Village Mysteries, Drew Baker is head chef. And in BUTTER OFF DEAD, third in the series (out July 7), we meet the Georges’ daughter Zayda and attend a gala dinner party at the Inn. 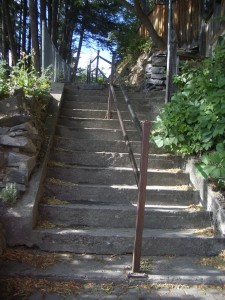 My Jewel Inn is loosely based on the Bigfork Inn, owned by Bob and Suzie Keenan, which has its own colorful history that I’ll let you check out for yourself. The Inn’s presided over the north end of the village—the original townsite—for decades. The WPA-built steps next to it lead up the hill to the schools and a residential area. I hope it continues to thrive—in life and on the page—for many more years. 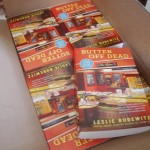 BUTTER OFF DEAD, out July 7, available for pre-order now.