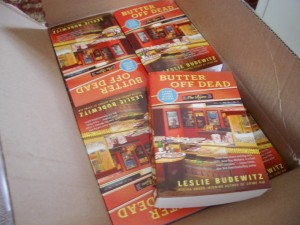 Time to celebrate! Join me for a launch party for BUTTER OFF DEAD, third in the Food Lovers’ Village Mysteries, from 5-8 p.m., Friday, June 26, at Frame of Reference Gallery in Bigfork, as part of the 3d annual (!) “Bigfork in Paint and Print” exhibit. Owner Derek Vandeberg has put together another terrific show featuring new and familiar artists and their renditions of the sweet town and stunning region that inspire my “Jewel Bay, Montana.” And Chef Dan Solberg is providing the food—from the book!

From the cover of BUTTER OFF DEAD:  “As the national bestselling Food Lovers’ Village mysteries continue, the merchants of Jewel Bay, Montana try to heat up chilly winter business with a new film festival. But their plans are sent reeling when a dangerous killer dims the lights on a local mover and shaker …

Yes, THAT Christine Vandeberg! BUTTER‘s official release date is July 7, but my publisher, Penguin Random House, has given me permission to sell physical copies early this one night only. (Sorry, no e-books until July 7.)

And if you’re worried about getting to both the book launch and the Crown of the Continent Guitar Festival concert that same evening, don’t fret (pun intended) — I’ll be at the gallery early, with books, food, and wine!

2 thoughts on “Party Time! Help me celebrate BUTTER OFF DEAD!”