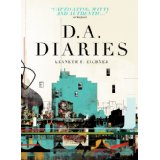 My guest today is Kenneth F. Eichner, a former prosecutor and author of D.A. Diaries. He has tried almost 140 jury trials and reports that he has been in court every week since 1983.

“You should have thought of that before you burned down your boyfriend’s house,” says the prosecutor, his voice dripping with indignation.

How many times have we seen this plea bargain scene in the stereotypical Law-&-Order-ish legal drama? As a practicing attorney and author of legal fiction, these scenes are nails on a chalkboard. The truth is that prosecutors do not plea bargain with defendants; prosecutors negotiate with the defendant’s attorney. Maybe one percent of the time a defendant in a big case goes it alone, but the rest of the time the accused has a public
defender or private counsel and does not even attend a plea bargaining session.

And here’s the real cringer: if the defense attorney was stupid enough to allow the client to attend a plea bargaining session, the client would be told not to speak. I think of attorney Brendan Sullivan, who represented Oliver North in the Iran Contra Hearings. In response to repeated questions directed to his client, Sullivan famously said, “what am I? A
potted plant?” Attorneys speak for their clients–it is the quintessential duty attorneys have. Sure, there is drama to be found when the noble prosecutor confronts the villain, but these exchanges just do not ring true.

“You have to take this deal – you go in front of a jury and they
will crucify you,” the attorney spoke with cold precision, emotionally removed
from his client’s peril.

Indignantly, the defendant rolled her eyes and crossed her arms.
“Whose side are you on? I thought I could trust you.”

Admittedly not National Book Award material, but I think you get
the gist.

Kenneth F. Eichner has worked as both a prosecutor and defense attorney. His trials include a number of high-profile cases that have been covered by The Washington Post, The Denver Post, and 60 Minutes. He began his career as a deputy district attorney for six
years in Prince George’s County, Maryland. For the past 16 years, he has worked on the other side of the aisle as a defense attorney in Denver.

For more information about D.A. Diaries and to view the trailer,
visit his website.

And if you’ve got a copy of Books, Crooks & Counselors, the factors considered in reaching a plea agreement are discussed on pp. 95-96.