Many of you know Dr. Doug Lyle, novelist, cardiologist, and all-around great guy who generously shares his knowledge of medicine and forensics with writers of all stripes, on writers’ lists and his own blog.  Today, he talks about the effect of TV crime scene investigation on real-life expectations.

You’ve no doubt heard of the “CSI Effect,” but what exactly is it and does it actually exist? Both the definition and whether it is real or not are controversial, with experts weighing in on both sides of the issue.

It derives from the many CSI or forensic science shows on TV, both fictional and documentary-style. Many point to the CBS series CSI: Crime Scene Investigation as the beginning of the effect, which then expanded with the appearance of the “CSI clones” and other shows such as Bones, NCIS, Cold Case, and Forensic Files. It is impossible to turn on the TV without seeing some crime show and forensic science is invariably part of the story. The same goes for virtually every case you see presented on national or local news.

The CSI Effect could be defined as the impact of these shows, which reveal cool and clever forensic science techniques, on the public, criminals, law enforcement officials, juries, and courts. They have created a level of expectation that simply isn’t realistic. They portray crime labs as being fully equipped with very expensive instruments and staffed with brilliant minds that magically uncover the most esoteric evidence. They make the very rare seem almost commonplace. They suggest that all these wonderful tools are widely available and frequently employed in criminal cases. The truth is vastly different. DNA is involved in perhaps 1% of cases and it isn’t available in 20 minutes. Crime labs are severely underfunded and most have meager equipment, not the plasma screens and holographic generators seen on TV. The lab techs are indeed smart and dedicated individuals but they aren’t prescient. They can’t magically solve complex crimes by simply “seeing” the solution in a microscope or within their minds. It doesn’t work that way. At least not often.

So how does all this information—or is it misinformation–effect the public, criminals, and the police and courts? Simply put, they teach criminals how to avoid leaving behind evidence and unrealistically raise the expectations of the public.

Criminals watch these TV shows and learn to alter their behavior to avoid detection. They learn not to leave behind fingerprints and DNA, to hide from surveillance cameras, to avoid using cellphones and computers in the planning and execution of their crimes, and a host of other things. Fortunately, these shows are not always accurate and don’t cover all contingencies involved in the planning and execution of a crime, proving the old adage that a little knowledge is a dangerous thing. The criminal thinks he has thought of everything but while he focuses on one bit of evidence he ignores others. An example would be the thief who planned a breaking and entering home robbery. He knew that shoe prints could be left in the soft dirt of the planter beneath his entry point window so he took off his shoes. He then realized he had not brought gloves, so to prevent leaving fingerprints, he removed his socks and used them as hand covers. The crime was interrupted by the home owner, an altercation with blood shed followed, and the thief left a bloody footprint on a piece of broken window glass. This proved to be his undoing.

The public, who make up juries, comes away from these shows believing that high-tech investigations are involved in every case and if the police or prosecutors fail to make DNA or blood analysis part of the case they must have done something wrong. And in some cases defense attorneys latch on to this and use it to undermine the police investigation. During the famous Scott Peterson case, how many times did you hear news reports and pundits talk about the lack of DNA evidence as if this made the case weak? In truth, finding Laci’s blood or DNA on Scott or his clothing would be of little help. They were married, they lived together, there were a hundred innocent reasons for Laci’s DNA to be found. Back in the 1960s and 1970s, juries wanted confessions and eyewitnesses, both of which we now know can be false and erroneous. Now, after the saturation of our psyche with forensic sciences, they expect DNA and other sophisticated evidence. This not only makes gaining a conviction more difficult but also gives prosecutors pause before filing charges in cases without such evidence.

So, it can be said that the CSI Effect alters the criminal justice system in many ways. It helps criminals avoid detection, creates unrealistic expectations in the public and in juries, and makes prosecution of some crimes problematic. But there are positive aspects in that this increased interest in forensic science has led to more people choosing this as a career and indeed the number of colleges offering forensic science curricula and degrees has mushroomed. 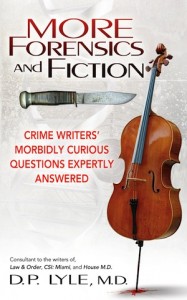 D. P. Lyle, MD is the Macavity Award winning and Edgar® Award nominated author of the non-fiction books, MURDER & MAYHEM, FORENSICS FOR DUMMIES, FORENSICS & FICTION, MORE FORENSICS & FICTION, and HOWDUNNIT: FORENSICS as well as the Samantha Cody thrillers DEVIL’S PLAYGROUND and DOUBLE BLIND, the Dub Walker Thrillers STRESS FRACTURE and HOT LIGHTS, COLD STEEL, and the media tie-in novels ROYAL PAINS: FIRST, DO NO HARM and ROYAL PAINS: SICK RICH based on the hit TV series. His essay on Jules Verne’s THE MYSTERIOUS ISLAND appears in THRILLERS: 100 MUST READS and his short story “Even Steven” will appear in ITW’s anthology T3: LOVE IS MURDER.

He has worked with many novelists and with the writers of popular television shows such as Law & Order, CSI: Miami, Diagnosis Murder, Monk, Judging Amy, Peacemakers, Cold Case, House, Medium, Women’s Murder Club, 1-800-Missing, The Glades, and Pretty Little Liars.

He is a practicing cardiologist in Orange County, California.

9 thoughts on “Doug Lyle on “The CSI Effect””