Today we welcome Lisa Black back to the blog. A latent print examiner and crime scene investigator in Florida, she’s also a suspense writer extraordinaire. I still remember that sleepless night, home alone, when I stayed up too late finishing one of her books and the smoke alarm kept going off…

We see Abby or Nick or someone in the background on Bones do it every week: scan a fingerprint picked up at a crime scene into some omnipresent Batcomputer and search it against everyone who has ever been printed in the entire United States, including job applicants and military.

This is a myth. It has always been a myth.

Databases are local. My database includes everyone arrested in the city of Cape Coral, Florida, since about 1998 and people arrested by the surrounding county agency since about 2008. No job applicants, certainly no military. Not even our own personnel. (Kind of embarrassing if the prints you collect at scenes come back to your own clumsy cops…it’s better to not even go there.)

Latent means hidden, referring to a print that can’t really be seen until it’s processed with something—powder, superglue, fluorescent light. But we use the term to mean unidentified prints, prints lifted at crime scenes and off pieces of evidence. These unknowns are compared to knowns—prints rolled (these days, usually with a scanner instead of ink) when a person is arrested. These are called 10-prints, though they also include the palms. My database has over two hundred thousand sets of 10-prints. A separate database is full of the unknowns, and I’m constantly searching items from one category against the other. I spend about 85% of an average day doing this, which is exactly as glamorous and thrilling as it sounds. 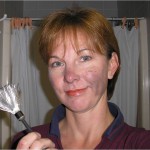 I identify about 11% of all the latent prints I get that are suitable for comparison, which is about 40-50% of all latent prints received. This is a pretty good rate as I believe the national average is more like 6%. Of course not every identification means that the case is closed—sometimes prints belong to the victim, other family members, house guests, or customers. [Note from Leslie: That’s Lisa, covered with black print powder. At least I got that part write — er, right — in the WIP!]

Side note: We do not do ‘elimination prints’, except on homicides. We enter the prints, and if they match someone who has no good excuse to be in the home, great. We don’t fingerprint every family member to eliminate them as having left the print—it is not an efficient use of resources to put in that kind of time and effort just to find out that the print on the window was made by the daughter.    [Note from Leslie: “except on homicides,” she says. Whew. I just wrote this scene….]

Another side note—just because I don’t have access to local job applicants and our own personnel doesn’t mean other examiners at other agencies don’t. Apparently it depends on the personal preferences of the higher-ups.

Any prints I can’t identify eventually go to the state, but it isn’t a digital process and it certainly isn’t instantaneous. Because the state software is slightly different from mine, I have to make a copy of the print cards for our files, repackage the originals, seal, submit to our Property Department, wait for them to assign a number and then fill out a (mercifully online) form to submit them to the state lab. Then some poor sucker at the state lab, who probably feels that they have enough of their own work to do, has to scan them, evaluate them and search them—all the work that I have already done, they do over. This is one of those ‘get to it when I have time’ projects, and the state lab limits me to five submissions per week, so right now I’m sending prints from 14 months ago. Okay, it’s clunky—but it works. We’ve made a number of ‘hits’ this way. Some we had already made by the time we get the state paperwork back, because the person had been arrested by us in the meantime, but some are a happy little surprise.

If this sounds dismally haphazard, remember that despite our best efforts to reach the shining ideals of TV shows with its spotless rooms, obedient children, and omnipotent computer databases, most of life is still haphazard. The perpetrator may not have been arrested. He may have been arrested but in a different state or a different county. He may work as a roofer or bricklayer and have worn-down ridges. He may have left a palm print at the scene and the person who rolled his palms cut off the interdigital section (something the county used to have a bad habit of doing). The latent print might be smeared right where his 10-print is clear, and his 10-print is smeared right where the latent is clear. He may have come up in the search results, but an examiner, clicking through search after search, got a little too cavalier and said ‘nah’ a little too quickly. (We have all done this, which is why a second examiner double checks everything.) And he may have had half a brain cell and actually pulled on a pair of freakin’ gloves.

However—all that said, the myth is becoming reality. Slowly and haphazardly, but becoming. As I’ve said I’ve been receiving prints from the county, a different software system, for the past 5 or so years. (I can’t search their database, which goes back decades, but their recent arrests are in mine.) The software I’m on now has the ability to remotely search the same software-based databases at other police departments, some in neighboring counties, some in other states, and vice versa (with their permission, of course). Unfortunately that caused such bugs in the system that we shut it down completely for over a year and only recently opened it back up again. Then, after an update, I noticed a checkbox in my search engine that said ‘federal databases.’ You mean I could actually search the FBI?  I filled out the paperwork, got the signatures of the higher-ups, sent it in. Eventually it came back but in the meantime our chief had retired so new paperwork had to be completed. Almost a year later (another of those ‘when I have time’ projects) I picked up the ball and tried again. Nothing. I have to go through the state, a very nice man from the state eventually tells me. The prints have to be sent there first. Our software doesn’t mesh with this, but if the software company can figure out a patch then the state has no problem with it. I call the software company. They are stunned to find out that the state will allow this. No one had actually asked them before.

So since the beginning of summer, the software company is working on a patch or conversion system or whatever it is, which they assure me is not difficult, and then they will work on interfacing with the state, and eventually, perhaps even by Christmas, after twenty years of seeing it on TV every day, I may actually be able to do a little bit of that omnipresent Batcomputer stuff.

About Lisa’s newest, Close to the Bone:

Close to the Bone hits forensic scientist Theresa MacLean where it hurts, bringing death and destruction to the one place where she should feel the most safe—the medical examiner’s office in Cleveland, Ohio, where she has worked for the past fifteen years of her life. Theresa returns in the wee hours after working a routine crime scene, only to find the body of one of her deskmen slowly cooling with the word “Confess” written in his blood. His partner is missing and presumed guilty, but Theresa isn’t so sure. The body count begins to rise but for once these victims aren’t strangers—they are Theresa’s friends and colleagues, and everyone in the building, herself included, has a place on the hit list. 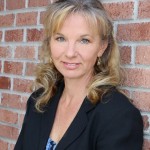 About Lisa: Lisa Black spent the five happiest years of her life in a morgue. As a forensic scientist in the Cleveland coroner’s office she analyzed gunshot residue on hands and clothing, hairs, fibers, paint, glass, DNA, blood and many other forms of trace evidence, as well as crime scenes. Now she’s a certified latent print examiner and CSI for the Cape Coral Police Department in Florida. Her books have been translated into six languages and one reached the NYT mass market bestseller’s list.