Cold and wet and downright yucky outside these days, but your comments and notes have me feeling all warm and fuzzy. My favorite note this past week has to be the Facebook post from the reader who said she bought GUILTY AS CINNAMON on Tuesday, release day, only to have her sister snatch it up. “Please write books my sister doesn’t like so much,” she pleaded.

Well. I love my readers, but I’m not going to promise THAT! 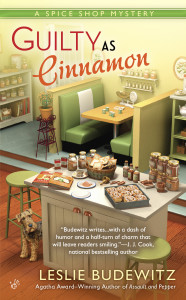 The reviews are delicious! I hope you’ll let me share a few quotes from reviews. Suspense Magazine will review CINNAMON in an upcoming issue. The reviewer calls it “s a zesty mix of a mystery with all the right ingredients to keep readers turning pages as quickly as possible. Delicious!”

The Open Book Society’s reviewer calls CINNAMON “[w]itty and at times intense,” saying “[t]he author’s love for the Seattle Marketplace, cozy mysteries, cooking, and spices comes through every page.” “The plot is rich with as many twists and turns as the alleys in the Marketplace, one that kept this reader revising her suspect list with each new twist. … The author has flawlessly executed a plot that had many twists and interrelationships I could not have anticipated. The main characters have a depth this reader also would not have anticipated in a relatively young series; I can’t wait for the next one to see how much better it will get!  I highly recommend ‘Guilty as Cinnamon’ to foodies who enjoy exploring new tastes and ideas (with many recipes included), cozy mystery lovers who appreciate an exceptionally well-plotted and written novel, and those who enjoy the Pacific Northwest area.”

And at the Sleuth of Baker Street bookstore in Toronto, CINNAMON is one of bookseller Marian’s picks for December. She loves mysteries that cook up murder, and picked up ASSAULT AND PEPPER because she loves spices and knows and loves Pike Place Market.I was delighted to hear that she quickly snatched up CINNAMON, and says of the pair, “A well written series with all sorts of info on spices.”

King’s River Life gives a fun recap of the story, and courtesy of the publisher, a giveaway!

Next week in the blogosphere: On Monday, December 14, I visit Auntie M Writes to talk about how movies set in Seattle influence my writing. Tues, December 15, is my day on Mystery Lovers’ Kitchen—we’re sharing ideas for Christmas celebrations. I’m pouring Pepper’s new favorite cocktail, the Negroni, and serving up Sandra’s Spiced Nuts. I’m also a guest that day on the Gotta Write Network, with a post titled No Chance of a Ghost. And on Friday, December 18, Moonlight Rendezvous will offer a review and a book giveaway. 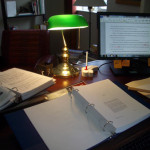 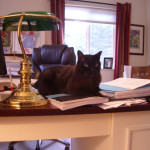 The supervisor—aka Ruff the Cat—and I are staying home this week. No events to report. I’m planning to write. He’s planning to nap, and dream of mice. And then, I’m summonsed for jury duty in state court. Will I finally be picked for a jury—I would love to serve, but maybe not during Christmas week—or will the combination of a lawyer and a mystery writer in one woman have the lawyers scratching me off the list and taking their chances with the next pick? Stay tuned …