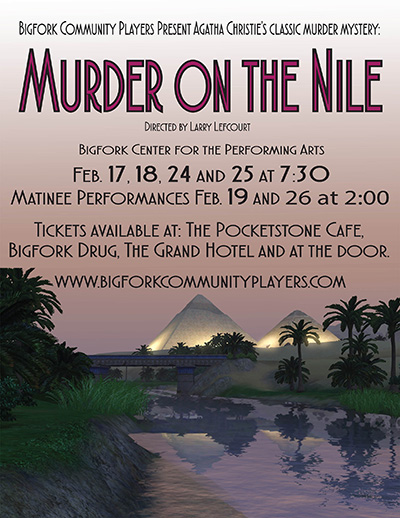 A few weeks ago, I was asked to introduce the Bigfork Community Players’ production of “Murder on the Nile,” Agatha Christie’s stage play based on her book, Death on the Nile. That got me thinking about Dame Agatha’s continued influence on readers and writers. The play is great fun—different from both book and movie—and it was a delight to be a part of the show for a night. My comments:

I’m Leslie Budewitz, author of the Food Lovers’ Village Mysteries, set in a fictional version of Bigfork, and the Seattle Spice Shop mysteries.

When Karen Koler asked me to join the fun tonight, we chatted a bit about the play, and our amazement at how widely read – and watched – Agatha Christie remains today.

And that got me thinking about Agatha Christie and her continued influence on mystery writers and readers.

For many of us, her books were the gateway into adult literature. When we’d had enough of Nancy Drew, we gravitated naturally to Miss Marple, Hercule Poirot, and my favorites, Tommy and Tuppence. I still remember buying my first Agatha Christie, a paperback, in a dime store in Burlington IA when I was ten or twelve. With my own money. I read it by the pool and begged my mother to let me go back and buy more.

Agatha Christie was born in 1890 and died in 1976. She wrote 75 novels, not all of them mysteries, 100 short stories, more than a dozen plays – some based on her novels, and two autobiographies. She was also a prolific diarist. I’m pleased to have won two Agatha Awards, named for the great lady herself, for nonfiction and best first novel. The year I was nominated for Best Nonfiction, one of the other nominees was John Curran, a Brit who’s written two books looking at her secret notebooks, where she sketched out her plots and character ideas, and occasionally wrote the first drafts of her short stories. Her books are still bestsellers, and her plays still draw crowds.

Because she was first and foremost a tremendous storyteller. John Curran attributes that in part to her unconventional education. She also had a tremendous curiosity about the world. She traveled widely with her mother, with her first husband, an army officer, and with her second, an archaeologist. Those trips inspired several novels, including Murder on the Orient Express. Her trip to Egypt was no doubt the spark for her 1934 short story called “Death on the Nile,” featuring Parker Pyne, one of her lesser-known detectives. She then expanded it into the 1937 novel, featuring Hercule Poirot, and later adapted it for the stage as Murder on the Nile, making significant changes along the way.

She also created highly memorable detectives. Miss Marple and Hercule Poirot are instantly recognizable. They’re both intriguing, he for his experiences, and she for her astuteness despite her apparent lack of experience. That nosy village woman lurks in many of us, and she’s the inspiration for so many modern amateur sleuths, including my own.

Both Miss Marple and Poirot were typically outsiders, although Miss Marple did occasionally investigate an incident in her own village, St. Mary Mead, and that outsider status gave them the ability to see things and make connections others – including the police – couldn’t see. That’s very much an element of the modern traditional mystery, as is the counselor or sounding board role that each often played.

Some of her secondary characters feel like cliches now, but I think that’s the result of time and imitation. She did a brilliant job giving her minor characters the telling details that made them come alive. She also used our assumptions about certain types of characters against us, such as our belief in the innocence of a caring doctor or a devoted child.

We also love her intricate plots. She often recycled plots, or wrote variations of them, which the very prolific can do. The mystery writer Robert Barnard wrote that she could use the same trick a second time – and still fool us. She hid clues in plain sight, and she was a master of the red herring. In fact, we’ll see tonight how she used misdirection to make us think one thing while something entirely different was going on.

She was daring, as anyone who’s read The Murder of Roger Ackroyd will remember, but I won’t say anything more, for those of you who haven’t read it yet.

I admire her ability to create a world. Tonight, we’ll feel ourselves part of the group on the cruise, and feel the friendships and tensions that develop. She had an uncanny eye and ear for the subtle conflicts between people, and as one writer friend pointed out, her subtle hints of inappropriate sexual obsession were way ahead of time. Morality is a recurring theme in her work.

She had wit. The same friend recalls her describing a character’s eyes as the color of “boiled gooseberries.” My friend had no idea what a gooseberry was, but the image totally painted a picture.

And she’s inspired modern day authors quite literally. There’s a mystery set a conference on Christie’s work, another hypothesizing that she wrote a long-lost play during her mysterious 1926 disappearance, and another involving a Golden Age of Mystery book club, structured like her novels. In my books, I use a Cast of Characters, as she often did, as a way to help readers remember who’s who, but also as another form of storytelling.

Dame Agatha remains popular because her stories still tell us something about human nature, and because they’re fun.

I’ll be in the lobby at intermission and after the show, chatting about mysteries – both Dame Agatha’s and my own. And I do have books and bookmarks available.

Thank you – and enjoy your trip down the Nile.

(Thanks to Art Taylor and his article in the Washington Independent Review of Books for the origins of “Murder on the Nile,” and to my friend Ellen Byron for sharing her memories and observations.)