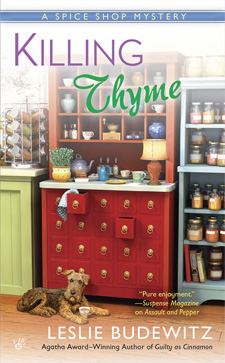 In Seattle’s Pike Place Market, Spice Shop owner Pepper Reece is savoring her business success, but soon finds her plans disrupted by a killer in the latest from the national bestselling author of Guilty as Cinnamon.

Pepper Reece’s to-do list is longer than the shopping list for a five-course dinner, as she conjures up spice blends bursting with seasonal flavor, soothes nervous brides fretting over the gift registry, and crosses her fingers for a rave review from a sharp-tongued food critic. Add to the mix a welcome visit from her mother, Lena, and she’s got the perfect recipe for a busy summer garnished with a dash of fun.

While browsing in the artists’ stalls, Pepper and Lena drool over stunning pottery made by a Market newcomer. But when Lena recognizes the potter, Bonnie Clay, as an old friend who disappeared years ago, the afternoon turns sour. To Pepper’s surprise, Bonnie seems intimately connected to her family’s past. After Bonnie is murdered only days later, Pepper is determined to uncover the truth. But as Pepper roots out long-buried secrets, will she be digging her own grave?

“…a feast for the senses.” — Open Book Society

“This clever plot had me so fooled I never saw the exciting reveal coming.” — Lisa K’s Book Reviews

“Budewitz has created a compelling heroine changing paths in her mid-life, and the choices she makes are as brave as they are entertaining.” — Kings River Life

“If you haven’t read about Pike Place Market and Pepper before, you’ve got to jump on board ASAP. The Spice Shop, Pepper’s fun-loving and strong-minded character, and a mysterious plot that calls for an all-day/sit-down read, makes these Pepper books a real cozy treat. What’s an added extra is that more details are brought forth about Pepper’s past, her family and friends and more, opening the door for many mysteries in this series to come.” — Suspense Magazine

“Why is it called a salt pig?” Matt said. “Is that like salt pork?”

“No, silly. Salt pork is pork belly that’s cured by salting instead of smoking. Think bacon. My grandmother used it to flavor her Sunday pork and beans.” Cayenne’s dark eyes flickered open and shut in remembered rapture, long lashes brushing her high cheekbones.

The banter between the Spice Shop’s newest employees put a smile in my heart. No last-minute desperation hires this time. He knows retail; she knows food. And as their boss, I knew within days of hiring them that they would be great additions to the Pike Place Market, Seattle’s heart, soul, and stomach.

But Matt’s cocked head and half squint said her explanation hadn’t cleared up the muddle over the classic salt container.

“Some sources say it looks like a pig’s back end if you stand it sideways on its head.” Cayenne used a particularly porcine model—smooth, glossy, and pinky-beige—to demonstrate. “But I’ve also heard that pig is an ancient Scottish word for a clay pot.”

“That works for me.” Roundish, sixtyish, sporting the short, dark hair of an Italian pixie, Sandra lifted the lid off a celadon green oval jar and mimed scooping out salt with two fingers. “This one’s good. Lets you get a grip on the stuff.”

“That’s another thing I don’t get,” Matt said. He slid into the mixing nook beside the rest of us. Seeing the crew gathered for our Wednesday morning staff meeting, each sipping coffee or our custom-blended spice tea, a box of pastries open before us, gave me the satisfaction of a mother hen.

After all that upheaval . . . I perished the thought. As if he read my mind from where he lay under the table, Arf rested his muzzle on my knee. I rubbed a thumb on the magic spot on his forehead.

“A pinch is really a guess. Why not measure?” Matt continued. “And what about hygiene?”

“You measure with your eyes and your mouth,” Sandra said. “A recipe may look precise, but it’s a guideline. You can’t know how much salt your soup needs until you taste it. Is your broth salty? Are your carrots and onions on the sweet side? You taste and balance.”

“Except when you’re baking,” I said, raising a finger. “Then you’re talking chemical reactions. But with herbs and spices, you have more freedom.”

“And cooks are trained to wash their hands a lot.” Cayenne set the salt pig back in the weathered wooden box and withdrew a rounded container. The lower half was glazed a rich, blue-streaked mahogany, the upper a cinnamon-speckled oatmeal. A hand-carved wooden spoon poked out of the almond-shaped opening in front. “Isn’t this wonderful, Pepper? The potter’s new to the Market.”

She handed me the earthenware pig. The opening allows easy access while keeping the salt free of kitchen dirt and drips. Salt is hydrophilic, so an unglazed interior absorbs moisture and keeps the salt from clumping. Nice, in Seattle’s damp clime.

“Are you her new sales rep?” Matt gibed.

“No. I just love her work, and I think we should carry it.”

“Wish we could. But if she sells through us, she’ll lose her Market permit. And the artists’ tables are a huge draw—she’ll do better on her own.”

Cayenne opened her mouth to protest, but I cut her off. “Hey, I don’t make the rules.” I set down the pig and reached for the potter’s card. “Bonnie Clay—Potter—Functional Sculpture. Oh, too funny.”

Blank faces stared at me. “Continuing the Scottish theme,” I said, “‘bonnie’ means pretty or attractive. So, her name translates to Pretty Pots.”

“Maybe she named herself,” Reed ventured. “Because of her work.”

She and Reed had come with the shop when I bought it nearly two years ago, and despite their differences in age and temperament, she treats him like a favorite puppy. Most days. Now, she ignored the wounded look on his gentle features, and he hunched over his tea, a lock of black hair flopping onto his forehead.

“Sorry, Cayenne,” I said. “Good find, but no go. I’ll take the samples back and talk to her.” We turned our attention to the long list of daily tasks. We’d all pitched in to train the newcomers while unpacking shipments, refilling hundreds of jars and canisters holding spices from around the world, making deliveries to restaurants, yada yada. Plus blending our own tea and spice mixes fresh every week. After years working all variety of retail, Matt had grasped our customer-first philosophy from the get-go. Cayenne oozes natural charm and has an encyclopedic knowledge of food. But she occasionally needs a reminder that no matter how busy she is sweeping up spilled thyme, the customer is never an interruption.

“Were you able to solve that glitch in the wedding registry software?” I asked Reed.

He opened his mouth, but Sandra spoke first. “There was no glitch. The bride has the same personality as her mother. The registry shows no gifts purchased because she has no friends.”

I suppressed a smile. The bridal mother had stomped in yesterday afternoon spewing complaints. We had wrongfully delayed sending her beloved daughter any gifts; our system bordered on false advertising, if not fraud; and we were not fit to kiss the hem of the most beautiful bride in Seattle’s pearl-encrusted train. “Send the bride our thyme gift box as a thank-you for registering.”

A perennial best seller, thyme was also our featured Spice of the Month. By mid-June, most Seattle gardeners are deep into maintenance mode, so we’d arranged the last few seedlings in the center of our main display table. The slightest movement of air sent pleasant grassy notes swirling through the shop.

“Anything else?” Three bright-eyed heads shook “no.” “Great. Let’s have a spicy day.”

The fourth head stayed bowed, and its owner stayed put. I waited until the others had slid out of the booth and started their morning routine. “What’s up?”

A long silence. “I hate women who bawl at work.”