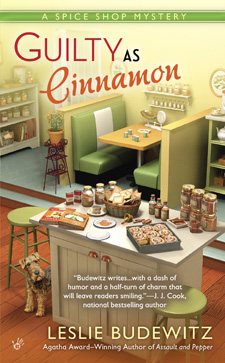 Praise for GUILTY AS CINNAMON

Booklist says “This engaging cozy makes the most of its Seattle location, effectively weaves facts about spices and their uses throughout the narrative, and boasts the feisty Pepper at its center. Sure to appeal to fans of Susan Wittig Albert’s China Bayles herbal mysteries.”

Fresh Fiction says: “Charming second installment in this cozy mystery series. … Leslie Budewitz is quickly becoming one of my favorite cozy mystery writers! I love how she blends together world building and character development to create just the perfect atmosphere for her stories.”

Suspense Magazine calls CINNAMON “a zesty mix of a mystery with all the right ingredients to keep readers turning pages as quickly as possible. Delicious!”

Night Owl Reviews calls CINNAMON “a thinking mystery [that] made me hungry for food and more of Leslie’s books.”

Chapter One
An ancient token of friendship as well as an ingredient in the anointing oils Moses used, cinnamon is one of the oldest-known spices, well traveled and heavily traded.

“Parsley poop.” The Indian silver chandeliers hanging from the Spice Shop’s high ceiling swayed, their flame-shaped bulbs flickering. The crystal candelabra they flanked burned on defiantly. As I stared up, unsure whether to curse the Market’s hodgepodge of ancient and modern wiring or the fixtures themselves, all three blinked, then went dark.

“Cash register’s got power,” Sandra called from behind the front counter. “And the red light district’s open.”

I glanced over my shoulder at the miniature lamp perched on the Chinese apothecary that displays our signature teas and accessories. The red silk shade glowed steadily, a beacon in the back corner.

“Better call the electrician,” I said at the exact moment as my customer asked, “Where’s your panel?” and Lynette, my newest and most annoying employee, said, “I’ll check the breakers.”

At the very next moment, the ceiling lights came back on, bright and steady.

Kristen started whistling the theme from Ghostbusters as she unwrapped a tall roll of paper sample cups for our special tea, black Assam spiced with cardamom, allspice, and orange. Any day now, we’d start serving an iced version alongside the hot brew made in the giant electric pot that looks like a Russian samovar.

“Don’t those ghosts know they should be sleeping this time of day?” Whether Sandra Piniella, my assistant manager, believes in ghosts, I don’t know, but she holds the wisecrack sacred.

This was one of those undecided mornings, common in a Seattle spring, that could turn gloomy or glorious, and the shop needed lights. I shrugged and turned back to Tamara Langston. I would let nothing—not even the magical, maddening Market—interfere with the prospect of becoming chief herb and spice supplier to this promising young chef, on the brink of launching the city’s hottest new bar and restaurant.

“Gotta love old buildings,” Tamara said. “The power in our new space has been giving me fits, too.”

“Tell me more about your plans.”

“Ingredient driven. Simple, yet adventurous. Food I love, prepared and presented in a way you’ll love.” An all-inclusive “you,” meaning anyone passionate for a great plate of food. Tamara vibrated with intensity, her presence boosting everyone around her to a higher frequency.

Maybe that’s what disrupted the lights. Like people whose personal magnetism stops watches and messes up computers. I’d known a few in my decade-plus as a law firm human resources manager, before buying Seattle Spice in the venerable Pike Place Market.

The chef was a fair-skinned blonde in her early thirties, roughly ten years younger than I. Thin and wiry—from hard work, not workouts—her features were too intense to call pretty. But she buzzed with an irresistible energy.

“Not vegetarian,” she continued, “but we will champion vegetables. And cocktails. We’ll pour the best gin in town.”

“I’m sold. We can get anything you need. Our supply networks circle the globe.” I gestured to the map on the wall, speckled with pushpins showing the sources of our hundreds of herbs and spices. In the year and a half since I’d bought the place, I’d worked hard to expand our offerings. To not follow trends, but set them. Peppers were hot, as was almost anything new. Especially the new and hot.

I like to think beyond that. So did Tamara.

“Tamarack is all about flavor,” she said, her small hand, scarred by burns and knife blades, opening and closing as she pumped her lower arm. “Both bold and subtle. Spicing should complement the food, not dominate it.”

Music to my ears. “Love the name. Where’s the space?” She hadn’t said. Restaurateurs often keep plans under wraps as long as possible, then leak a few juicy hints, aiming to pique curiosity and build buzz.

“Lower Queen Anne.” She kept her tone low and cagey, though we had no other customers at the moment. “Next to Tamarind, the Indian place. I’m spending every spare moment there. The architect came up with the coolest design—woodsy but light filled. Like the best picnic you ever had, but no rain and no ants.”

Tamarack was a joint venture with Danielle Bordeaux, the visionary owner of half a dozen of Seattle’s favorite eateries and drinkeries. If I played this right, we might get her business, too.

“Great concept. Good location—near the Center, Queen Anne, Magnolia.” Near money.
“Aren’t you worried that the names are too similar—Tamarack and Tamarind?” Sandra swept by, a giant jar of Turkish bay leaves in her plump arms.

“I like the synchronicity. Our image will set us apart.” Tamara’s luminous green eyes shone. “Not to mention the line streaming out our door.”

“Isn’t that space haunted?” Black Sharpie in hand, Lynette paused in her task of checking items off a delivery list.

“Let me give you a sample of those Ceylon quills.” True cinnamon, my finest grade, still called by the ancient name of the island where it originated. I pulled a jar off the shelf and carried it to the front counter.

“Alex giving you a hard time about leaving for a competitor?” I twisted off the lid and reached for clean tongs. Tamara’s silence snagged my attention and I looked up.