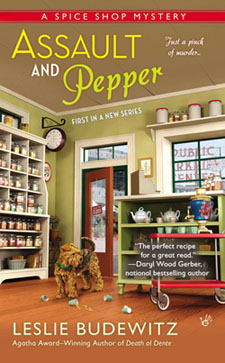 Available at:
Amazon
Barnes and Noble
Books-A-Million
Bookshop.org
IndieBound
And your local bookstore!

Pepper Reece, owner of the Seattle Spice Shop, thinks she can handle any kind of salty customer—until a murderer ends up in the mix…

After leaving a dicey marriage and losing a beloved job in a corporate crash, Pepper Reece has found a new zest for life running a busy spice and tea shop in Seattle’s Pike Place Market. Her aromatic creations are the talk of the town, and everyone stops by for a cup of her refreshing spice tea, even other shopkeepers and Market regulars.

But when a panhandler named Doc shows up dead on her doorstep, a Seattle Spice Shop cup in his hand, the local gossip gets too hot for Pepper to handle—especially after the police arrest Tory Finch, one of Pepper’s staffers, for murder.

Tory seems to know why she’s a suspect, but she refuses to do anything to curry favor with the cops. Convinced her reticent employee is innocent, Pepper takes it on herself to sniff out some clues. Only, if she’s not careful, Pepper’s nosy ways might make her next on the killer’s list…

Praise for ASSAULT AND PEPPER

“Now a little something for the gourmet, as there is a new amateur detective in the area named Pepper with a recipe box filled with spices and other scrumptious foods. Set in Seattle, this is the perfect read for a few hours of pure enjoyment, because along with a first rate story comes ‘Recipes and Spice Notes’ that the Spice Shop recommends. As you enjoy the read, look forward to creating dipping sauces, frittatas, and other mouth-watering dishes in your very own kitchen.” — Suspense Magazine

“A potpourri of spices, a mélange of murder—Pepper and her crew serve up a tantalizing mystery and a fragrant treat for the senses.” — Connie Archer, national bestselling author of the Soup Lover’s Mysteries

“There’s a savvy new amateur sleuth in town, and her name is Pepper Reece. ASSAULT AND PEPPER is a smart blend of zesty characters, piquant spices, and scrumptious food. Set against the intriguing Seattle backdrop, this well-plotted whodunit is the perfect recipe for a great read.” — Daryl Wood Gerber, national bestselling author of the Cookbook Nook Mysteries

“Leslie Budewitz writes her new Seattle Spice Shop Mystery, ASSAULT AND PEPPER, with a dash of humor and a half-turn of charm that will leave readers smiling.”
— J.J. Cook, national bestselling author of Death on Eat Street

“An iconic Seattle setting, a smart and capable heroine, and a spicy investigation… what mystery reader could want more? Budewitz combines it all with effortless finesse.” — Victoria Hamilton, national bestselling author of the Vintage Kitchen Mysteries

Librarian and reviewer Lesa Holstine calls the book “a treat for the senses.”

And the Billings Outpost calls it “a solid entry to the mystery genre thanks to Budewitz’s great descriptions, evocative setting and engaging mystery.”

Kings River Life writes: “Budewitz continues to whet the appetites of her readers while also highlighting the many unique characteristics of Seattle. … Full of humor and delicious descriptions of local cuisine, Assault and Pepper isn’t afraid to tackle timely social topics and the complexities of family, responsibilities, and learning to let go.”

An herb is a fresh or dried leaf. A spice is a dried plant part—a bud (cloves), bark (cinnamon), root (ginger), berry (peppercorns), seeds (fennel), or even stigma (saffron). The same plant may provide both—fresh or dried cilantro leaves are the herb cilantro, while the dried seeds are the spice coriander.

“What does autumn taste like? How does it smell?”

Even as I asked, the questions seemed utterly ridiculous. This was already shaping up to be one of those glorious September days in Seattle that make you think the weather will never change, that the sky will always be a pure cloudless blue, the leaves on the trees a painter’s box of green, the waters of Elliot Bay calm and sparkling.

I’ve lived here all my forty-two years, and I still get fooled.

But as the owner, for the last ten months and seventeen days, of the Seattle Spice Shop, it was my job to think ahead. Fall would be here in less than a week, by the calendar. And by my nose. I really could sense the difference right about this time of year. The annual run on pickling spices for the last cukes would soon give way to cider mulling mixes. And before long, our customers would be asking for poultry seasoning and scouting for Christmas gifts.

“The taste,” I repeated to my staff, gathered around the butcher block worktable in our mixing nook, “and smell of fall.”

Sandra fanned herself with a catalog from the kitchen shop up the hill and peered over the top of her reading glasses—today’s were leopard print. “Fall, shmall. It’s seventy-six degrees out.” Spot-on to most Seattleites, but my assistant manager is one of those native Northwesterners who thrive in a narrow temperature range. Anything above seventy-two and she sweats; below forty-five, she shivers. And complains, cheerfully. A short, well-rounded woman of sixty with smooth olive skin, pixie-cut dark hair, and lively chocolate brown eyes, she came with the place, and I say daily prayers of gratitude that she stayed.

“Apples,” Zak said. “Applesauce, apple butter, spiced apple cake. Plums in brandy. Plum pudding. Fruit cake.” Zak had been my first hire after I bought the shop. Six-two and almost thirty, with muscular shoulders, he’d seemed an unlikely candidate for employment in a retail spice shop in Seattle’s venerable Pike Place Market. But I’d been desperate and he’d been earnest. And he pleaded for a weekday job so he could rock the nights and weekends away with his band.

Plus he’s my ex-husband Tag’s best friend’s nephew, and I have to admit, Tag Buhner isn’t always wrong about people.

“You have fruit on the brain,” Sandra said. “Been flirting with the orchard girls again?”

The orchard girls, two sisters with shiny black hair, full red lips, and curves in all the right places, had caught the eye of every straight man under thirty-five in the Market since they took over the family fruit stand this past summer. Their looks and the location of their stall—they usually draw a prime spot across from us on Pike Place, the Market’s long, cobbled main street—guarantee plenty of attention.
That their fruit is the freshest and their jams the tastiest doesn’t hurt.

“Our tea is the essential fragrance of the Market year-round,” I said, pointing my pen at the ornate brass electric teapot that resembles a Russian samovar. We’d just resumed serving the hot black Assam tea spiced with cardamom, allspice, and orange, although the iced tea dispenser would stay out a few more days.

“That, and fresh fish.” Zak had recovered from his embarrassment. The fish merchants near the Market’s main entrance put on a comedy routine to rival the Marx Brothers’, tossing whole coho salmon like softballs, teasing customers, and welcoming both locals and wide-eyed tourists to the heart and stomach of Seattle.

Zak filled his mug, emblazoned with a Z, and snatched a hazelnut cookie from the box. It wouldn’t be a staff meeting without treats from the French bakery.

“We need three or four new blends,” I said. “For our home cooks. Zak’s zeroed in on the harvest aspect of fall. But I’d like something to rub on those fish, or a slow-cooked chuck roast. To warm up the salty mist and stave off the chills, until we get into the familiar tastes of Christmas.”

My staff turned thoughtful, summoning their own ideas of fall. They say the sense of smell is the most intimately linked of all our senses to memory, and I believe it. One whiff of a familiar scent, even one we haven’t encountered in years, can transport us to a time and place long forgotten, even before we consciously recall the memory.

Our task was to find common elements and translate them into balanced blends of herbs and spices to evoke a positive sensory experience for our customers.

The Wednesday morning staff meeting is one of the few times we’re all in the shop together. Such a satisfying sight.

Actually, we were one person short. I checked the clock—a large, copper-rimmed metal ticker—next to the front door. As if on cue, the door opened and a blond cloud swept in.

“Right on time for the eight-seventeen meeting,” I said with a grin. Kristen Gardiner and I have been best friends since childhood, when our families shared a creaky, turn-of-the-century house on Capitol Hill. She still lives in the house, a classic Seattle Box built by an ancestor, although now it glows with an attic-to-cellar makeover that would color any decorator in the Emerald City green. She helps out in the shop a few mornings a week, and she is never, ever on time.

“I’m so sorry, Pepper. One of the girls forgot her lunch and I had to—”

“Something pungent and flavorful.” Reed spoke without glancing up from his task of running a rubber stamp of the shop name over small white paper cups. Shoppers who drop in for a sample of tea often end up buying herbs, spices, or other goodies they’d forgotten they needed. Or that they didn’t need, but the fragrance and possibilities set their taste buds and imaginations awhirl.

“It’s so neat how you can trace geography and history through spices,” he continued. “When I open a jar of chili pepper cocoa, I’m in the world of the Aztecs. Ask me for a curry, and I’m halfway to India.” Maybe five-six, an inch shorter than me, slight, with shaggy black hair and hooded eyes, Reed Locke is a history major at Seattle University. Wednesdays, he comes in early before dashing off to classes. His father runs an acupuncture clinic nearby, so he practically grew up in the Market.

We all turned to the world map on the wall, where colored pins mark the origin of every spice we carry. Many spices have migrated and become integral to cuisines and economies far from their genesis. The map also hides an ugly water stain on the plaster that paint hadn’t covered. Spice has added flavor to the Market since shortly after its founding in 1907, when our main competitor opened a shop, still prospering. In the fervor surrounding the campaign to save the Market from redevelopment in the early 1970s, hippie chick Jane Rasmussen threw her lot in with capitalist competition and started this shop. Why she thought the Market could support two separate spice merchants, I don’t know—but she’d been right, running this one for forty years until she sold it to me and retired to an island in Puget Sound. Our building once housed a nursery, and in spring, we honor that heritage by carrying seed packets and potted herbs.

I like to think of myself as the caretaker of one piece in the Market puzzle.