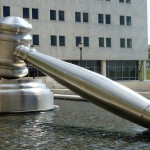 A judge in western Montana got a little annoyed last week when twelve of 48 potential jurors summoned for a trial failed to show up or contact the court to explain why they should be excused. Another dozen did contact the court, leaving only 24 potential jurors. As the Missoulian reports, Judge Jim Manley then ordered the twelve to contact the court, provide their explanations, and write letters of apology. Five complied immediately; seven presented their excuses in person—he accepted three, but held the other four in contempt, with their $100 fines waived if they write an apology.

The judge’s comments—he’s a personal friend whose work as a lawyer I admired long before he took the bench last year—focus on the importance of jury trials, how revolutionary our system was when established over 200 years ago, and how it depends on each of us to function in a way that serves and protects each of us. Worth reading—for your fiction and your role as a citizen.