Today, let’s talk about something different: writing process. Readers, I’ve learned, are fascinated by it — how on earth, they wonder, do these seemingly normal people come up with the stories they tell? How many people actually do live inside Leslie’s head? A glimpse inside someone else’s process can be an important part of a writer’s self-education, especially in the early stages. So when Peg Brantley asked me to participate in this “blog hop” — a series of writers answering the same questions — I agreed.

And to tell you the truth, it’s been fun for me to step back and think about my own process a bit. 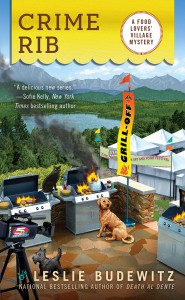 1. What am I working on? I write two cozy mystery series, so I’m always working on several mss. at once, in different stages. CRIME RIB, second in the Food Lovers’ Village Mysteries, set in Northwest Montana, will be out July 1. When the hot TV show Food Preneurs comes to Jewel Bay to film the annual steak-grill off, can Erin stop a killer—before the town’s reputation goes up in flames?

I’ve just turned in the third village book, set mid-winter during the first annual Food Lovers’ Film Festival. Working title: IT HAPPENED ONE BITE. Very soon, I’ll be working with my editor on edits for the first book in the Seattle Spice Shop Mysteries, ASSAULT AND PEPPER (out March 3, 2015), in which Spice Shop owner Pepper Reece investigates when a resident of Seattle’s Pike Place Market is found dead on her shop’s doorstep and an employee is arrested for murder. I’ve just started writing the second in the series. Working title: GUILTY AS CINNAMON.

2. How does my work differ from others of its genre? Part of the fun of a cozy mystery is the set-up: the amateur sleuth who feels compelled to investigate a crime because it touches her personally. Her role in the community gives her knowledge and perspective the police lack—and an inside track on the killer. The cozy is ultimately about community, and the amateur sleuth’s work is essential to restoring the social order in the community. 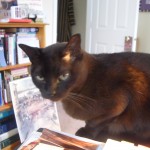 I like to think my cozies feature all the essential ingredients—the sleuth with the fun occupation we’d all like to try for a day, good friends and family, adorable pets, and great food—done thoughtfully. Both my protagonists—Erin Murphy in the Village series and Pepper Reece in the Seattle Spice Shop series—have a strong drive for social justice. I strive to tell stories that are about something. And the Village series presents a view of rural Montana that, while very real, will surprise readers who haven’t been here.

(Photo: Everyone needs a supervisor. Here, mine gives the WIP a stern inspection.)

3. Why do I write what I do?  The cozy is a great vehicle for story. I get to spend the day with people I enjoy in interesting places, see what happens when they’re thrown into tough spots, and through them, explore deeper personal issues. I’m a happier, healthier person because I spend most of my time with people who only exist because I made them up.

And I get to create yummy recipes—all easy and thoroughly-tested—and deduct the expense on my taxes. 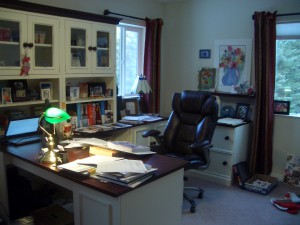 4. How does my writing process work? Depends what stage I’m at with the WIP—work in progress. At the moment, I’m planning the next book, which means hitting on the basic scenario, turning it over in my mind, and working out the key points. Who is killed? Why? How, where, and by whom are critical, of course, but “why” answers all those questions. What is Pepper’s motivation for investigating? I’ve got to play with the characters, taking long walks and asking them questions. (If you see me driving, pulled off the side of the road, I’m probably making notes on a plot point or scribbling out dialogue.) To me, story consists of this: a character with a problem that leads to a struggle and a resolution—all intertwined with other characters struggling with their own problems. I’ve got to know what drives the key characters—Pepper, the victim, the killer and the suspects, the primary witnesses, and Tag, Pepper’s ex-husband, a Seattle bicycle cop whose beat includes the Market and whose heart still beats for her. What do they most want? What will they do to get it? What will they do when they don’t get it?

And of course, while I’m making things hard for the characters, I’ve got to keep it fun for the readers. So there must be a subplot or two that keeps things light. As well, readers want to feel they’re actually visiting the places they’re reading about, so I need to make the village of Jewel Bay, Montana and the city of Seattle come alive.

Theme matters a lot to me, but it’s got to be subtle. I find it emerges on its own when I explore what matters most to the characters.

Simultaneously, I’m taking these ideas and developing them into scenes. Since one thing leads to another, the order of the scenes is usually pretty obvious. I take that list and create a rough outline—a road map. Flesh it out and break it into chapters, but it’s still pretty rough. Sometimes the chapter outline is 4 or 5 sentences, one of which may be “Pepper investigates” or “Erin does stuff—what is Danny doing???” The outline may include a patch of dialogue or description—which may stay as is, be heavily revised, or fly out the window when I actually write the scene.

Some writers disdain the outline, viewing it as a left-brained tool that kills spontaneity. “If I knew what happened,” I once heard a writer say, “I wouldn’t want to write the story.” Instead, she described a pains-taking process of figuring out what her characters would do, shaping her notes into scenes, putting the scenes in order, and writing the book. Well, yes. That’s exactly what I do—but I call it an outline! It’s an evolving, messy, kinetic, essential thing. “Essential” meaning necessary AND meaning it gets to the heart.

IMO, we cannot get to the heart of story if we don’t take the time to listen to our characters, to identify their problems and struggles. What they want and what that will drive them to do in this story. Whether you’re an outliner aka a planner or plotter, or a pantser (writing by the seat of your pants), you’ve got to know these things about your characters, or your story will falter.

And that’s no fun for anyone.

Here’s suspense novelist Peg Brantley’s post on her process. Some similarities, some differences.  Tell me about yours in the comments.