The past two weeks, we’ve been celebrating the upcoming release of my third Food Lovers’ Village mystery, BUTTER OFF DEAD, with a glimpse of some of your favorite authors’ prized collections. Today—mine, and a few musings.

(And a double giveaway: a signed bound galley of BUTTER  and a copy of THE COZY COOKBOOK. Scroll down for details.)

I thought I’d escaped the collector gene. My father’s baseball cards and memorabilia, his stamps and first-day covers, his postcards, the cameras and carved wooden boxes he brought back from his captivity in Switzerland during the war—all intrigued me, but I never felt a need to follow suit. One Barbie doll was enough, and even that had been a gift. The trolls? Fun, until I was done with them. My brother got the gene—and the collections, and he’s added to them. My sister-in-law has her fabrics and her cat figurines and her pottery, my mother her angels, my husband his swords and Huichol Indian beadwork. 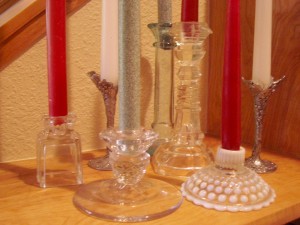 Even when I wrote BUTTER OFF DEAD and found myself musing about when a collection becomes an obsession, and when an obsession becomes deadly, I didn’t think of myself as a collector. I don’t stop at garage sales and rarely scrounge through antique or junk shops. The umpteen glass candlesticks? An accident that began with two Fostoria Americana singles I found at an antiques show in Seattle, when I went with a friend. I’d always loved the pattern and snatched them up, inspired by my mother’s doubles. I bought other shapes and styles; she searched out a few more, and a friend joined in the fun. 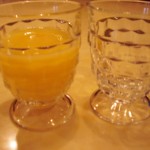 Then I visited that friend in San Jose and carried home two Fostoria goblets. (The TSA guard was initially troubled by all the packing material, until I rattled off exactly what was in the package. As in fiction, details are persuasive.) When my mother sold the family home, she gave me her pieces, all wedding presents. Then she added another two or three, and the friend in California has a long memory …

The first antique bottle surfaced when I was digging a hole for a yew at a farmhouse I once owned. A second hole yielded a second bottle—I’d probably found the homesteader’s garbage heap. Now gardener friends share their finds, and a few others have come to me as well—bottles that once held ink, cream, patent medicines, and who knows what else. 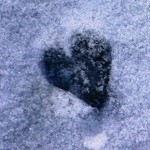 The hearts? Okay, you got me: that’s a collection, though the only heart I’ve ever bought to add to it is a rusty, elongated metal cut-out, found while browsing in Spokane. Many are found objects—copper wire, shells, rocks, and this whitetail hoof print. I gave the collection to my girl Erin In BUTTER, and a certain someone adds to it… 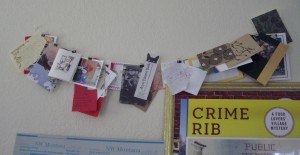 What about the notes readers have sent me and the bookmarks from stores where I’ve given talks or readings? Collection, or inspiration? Both.

My first brass doorknob came from 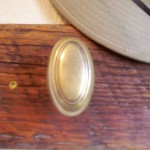 that same rural Montana farmhouse. They’re hard to reuse in modern doors, so I kept my treasured few in an old cigar box (and no, that’s not another collection!) until we planned a major remodel. A friend who’d salvaged a few knobs in his days as a builder rounded out the collection, and we created this coat rack inside our back door. 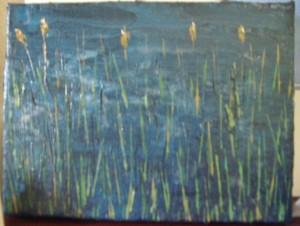 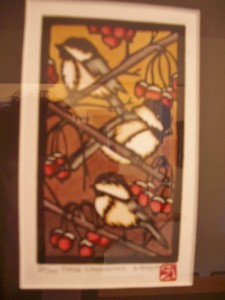 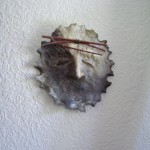 One more: Since my unpublished days, I’ve bought myself a piece by a local Montana artist as a prize for finishing a book. (Still haven’t bought the prize for BUTTER; must go shopping!) Here are a few faves: an iridescent cattail grove by Christine Vandeberg (you’ll meet her namesake in BUTTER); a woodblock print called Three Chickadees by Sarah Angst; and a tree spirit by Lana O’Myer.

Over the last two weeks, as we’ve shared our collections, it’s been clear that readers and writers simply must have our books. One reader said books aren’t collections, because collections are luxuries and books are necessities. Mine, like most of yours, I suspect, were bought to be read, not to complete a set or fulfill a search. Maybe that makes me less a collector and more a reader. I can live with that!

Another reader called our collections part of our identity, and there’s a lot of truth to that. Even the authors who initially told me they didn’t collect anything quickly realized otherwise.

Some collections, it turns out, are accidental. Others are inherited. Some are nurtured; some the owners wish had never gotten started! They are, ultimately, symbols of connection—to a time or a person long gone. To a place we loved, to a feeling they bring. To friends, to lovers, to family. To pieces of ourselves.

What better symbols of all that than hearts and light?

Leave a comment on my Facebook page or blog by midnight, Tuesday, June 2, for a chance to win a SIGNED bound galley of BUTTER OFF DEAD or a copy of THE COZY COOKBOOK, telling me which book you’d like to win. Ruff the Cat will choose a winner at random—check back Wednesday to see who sent him the tastiest catnip bribe! 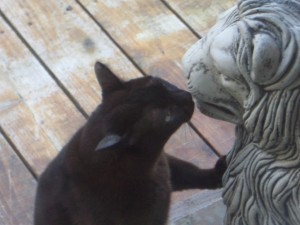 (This contest is not sponsored or endorsed by Facebook.)

83 thoughts on “Collecting can be murder — Leslie Budewitz — #bookgiveaway”