November 25, 2014: The 9th Circuit concluded that Judge Molloy applied the wrong standard, reinstated Didier’s conviction, and sent the case back to the District Court for further proceedings — presumably including sentencing. More from the Daily Inter Lake. Meanwhile, the mansion has been sold yet again. I hope it finds the right owner — loving and sufficiently financed — to restore its grace and grandeur.

The updates continue. This week, the latest on the Case of the Beauty Queen Who Turned to Crime. 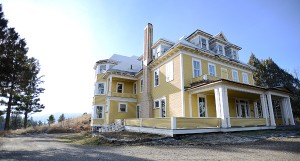 As I’ve written before, Miss Montana 1997, Christen Didier, was convicted by a federal jury last April of mail fraud and conspiracy, after collecting nearly $123,000 for temporary housing from her homeowners’ insurance company. Didier and a business partner bought a well-known historic mansion in northwestern Montana which was damaged by wind and fire. She moved out and made insurance claims for the property damage and for replacement housing, claiming to be living in a five-bedroom home with a swimming pool and other amenities, at a cost of $15,000 a month. In fact, she was living in a small family-owned cabin with no indoor plumbing, at around $800 a month. The trial judge, Donald Molloy, vacated the conviction in July. The Billings Gazette reports that Judge Molloy has now issued a written decision stating his reasons. In his view, the insurance company owed Didier the amount “sufficient to maintain her standard of living” — that is, comparable housing — regardless of how she used the money.

Quoting the Gazette: “He likened it to keeping the money rather than having your car repaired after a collision.

“Is it mail fraud when the owner of a damaged car gets the requisite three estimates, obtains payment by mail from the carrier but then has someone else do the work, pocketing the difference or savings?” Molloy wrote. “What if the owner never has the damage repaired, is that fraud?””

The U.S. Attorney’s office, which brought the case, has appealed his decision. I’m surprised that the issue — whether she was entitled to recover the cost of comparable housing, or only the amount she actually spent — was not determined before trial or as part of deciding what instructions to give the jury. It’s up to counsel — not the judge — to raise those issues, but it’s not surprising for a judge — particularly one as firm-minded as Judge Molloy — to direct counsel to brief an issue he’s identified that they have not raised.

Money may not be the root of all evil, but it’s certainly at the heart of a lot of crime.

3 thoughts on “Update: The Beauty Queen, the Mansion, and the Conviction that Isn’t”