The U.S. Supreme Court has now held that law enforcement officers must get a search warrant for most cell phone searches.

“Modern cellphones are not just another technological convenience. With all they contain and all they may reveal, they hold for many Americans the privacies of life,” Chief Justice John Roberts wrote in Riley v. California, one of two cases on the issue decided on June 25.

The federal government and the state of California argued that cell phone searches should be allowed under the same rationale that allows police to empty a suspect’s pockets and examine whatever they find to ensure officers’ safety and prevent the destruction of evidence. But the court agreed with the defendants, saying that the comparison was not accurate. A cell phone is simply too powerful, and may hold far too much private information, to allow a warrantless search in most situations.

The court did acknowledge that there may be legitimate concerns about the destruction of evidence; when those concerns arise, steps can be taken to prevent a person from remotely erasing a phone’s contents or activating encryption.

There is a long-standing exception to the warrant requirement when officers reasonably fear for their safety or the lives of others — such as a bomb threat or a kidnapping case. The court also left that possibility open.

In the San Diego case, police looked through David Riley’s smartphone after his arrest and found video and photos indicating gang membership, which they used to convict him of attempted murder and other charges. California courts had upheld the convictions and use of the evidence; the California Supreme Court must now take another look at Riley’s case.

In the Boston case, Brima Wurie was arrested on suspicion of selling crack cocaine. Police checked the call log on his flip phone and used it to figure out where he lived. They got a warrant to search his home, where they found crack, marijuana, a gun and ammunition. He was convicted and sentenced to more than 20 years. The federal appeals court ruled that police must have a warrant before searching arrestees’ cellphones, reversing most of the convictions, but upholding his conviction for selling cocaine near a school, a charge unrelated to the tainted evidence. The administration appealed the court ruling because it wants to preserve the warrantless searches following arrest. More, including the opinion, from the SCOTUS blog.

Consider how you can use this to help your characters, or create more obstacles. 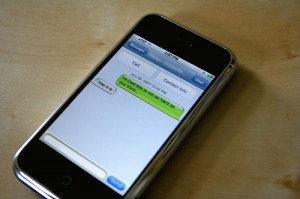 Yesterday I wrote about some of the legal issues in searching cell phones. Today, the Washington Post reports about the search for computer software millionaire John McAfee–your computer may run antivirus software from the company he founded–wanted for questioning in a neighbor’s death in November, and how a hacker used information embedded in a photo McAfee sent to track him down in Guatemala. Part cautionary tale about the info our smart phones reveal (well, yours–I don’t have one), and part intriguing story of genius gone astray. No matter which, it offers lots of potential for complicating your own stories of mystery and intrigue.