“Fiction is nothing less than the subtlest instrument for self-examination and self-display that Mankind has invented yet.”

“Art enables us to find ourselves and lose ourselves at the same time.”

” A word is not the same with one writer as with another. One tears it from his guts. The other pulls it out of his overcoat pocket.”

(Thanks to P.J. Coldren for sharing this.)

There’s a passage in the semi-autobi0graphical novel, set mainly in the 1930s, A Bird in the House (1970) by the Canadian novelist Margaret Laurence that always makes me smile. Young Vanessa refers to a friend’s family as “broke.” Her grandmother, who lives with Vanessa and her parents, chides her. “Vanessa, don’t use slang. If you mean they’re hard up, say they’re hard up.”

Here’s a more academic take on my smile:

“This is the usual destiny of euphemisms; in order to avoid the real name of what is thought indecent or improper people use some innocent word. But when that becomes habitual in this sense it becomes just as objectionable as the word it has ousted and now is rejected in its turn.” Otto Jespersen, Growth and Structure of the English Language 258 (9th ed. 1938).

Reblogging today, from NW Sidebar, the blog of the Washington State Bar Association, with thanks to blogger Shanna Lisberg.

When I first started law school and began reading opinions, I was surprised to see how many judges and justices had first names starting with J. After all, they signed their opinions “Harlan, J.” and “Marshall, J.” Took me longer than it should to have to realize that J. stood for Justice or Judge, not John or James…

“The Supreme Court of the United States first convened on Feb. 2, 1790, in New York City. Over the past 220 years, the composition of the Court has undergone many changes. Prior to the Supreme Court Building’s completion in 1935, the Court had met in a variety of locations and, to date, 108 men and four women have served on the court. From the most common first name of Supreme Court Justices, to relatives serving on the court, here are five facts you may not know about our highest court in the land.

Shanna Lisberg. Shanna is an attorney who lives and works in Seattle. You can find her most weekends at either the bookstore or library, adding books to her never ending to-read pile.” 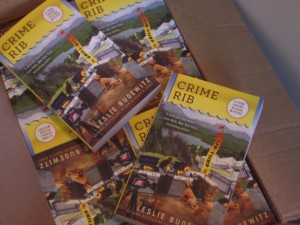 Thanks to everyone who came out to the Jewel Bay — oops, I mean Bigfork Festival of the Arts this weekend! I’m still there today, Sunday August 3, so if you’re in the Flathead Valley, come down to the Village for arts and food fun!

Celebration! Readers of the Bigfork Eagle, the local paper, named me “Best Local Author”! Thank you!

And both Crime Rib and Death al Dente made the Seattle Mystery Bookshop‘s July bestseller list! Smoocheroos to everyone who helped.

A fun interview: This week, I’ll be interviewed at Cozy Up with Kathy, who asks a few questions I haven’t been asked before.

The giveaway at Escape with Dollycas continues until August 6. If you haven’t read my essay on why I write about Montana, the Last Best Place to Hide, stop by — and leave a comment for a chance to win a copy of Crime Rib. There’s also a wonderful review of the book. 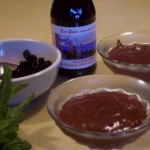 You know how Erin and I love huckleberries! So if you didn’t get a chance to join us — well, me — this weekend, pop up to Whitefish anytime this Fri, Sat, or Sun and visit me at Huckleberry Days in Depot Park. I’ll be chatting mysteries and signing copies of Crime Rib and Death al Dente. And if it’s made with hucks, you’ll find it at the Festival, so come on down!

Thanks so much for sharing in the fun of launching Crime Rib into the world!

“How can anyone say what happens, even if each of us dips a pen a hundred million times into ink?”

– Rumi, in The Essential Rumi, translations by Coleman Banks with John Moyne